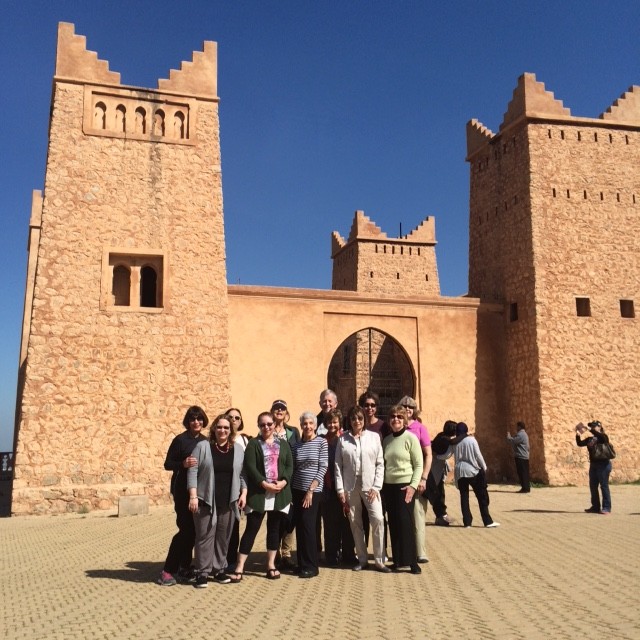 On Shabbat, I walked to the Slat El Azuna Synagogue, one of  only two synagogues left in Marrakesh, once home to 35 places of Jewish worship.

As I went through this fascinating medieval city with our wonderful guide, Michal Granot, through the "medina" and into the "mellah", the Arab world's equivalent of a ghetto, we passed several shopkeepers who wished us "Shalom". As we approached the ancient mellah, fortified neighborhoods where they could be protected,  and its recently refurbished synagogue, Muslim neighbors and even some young children told us that "the synagogue is closed today. It's Shabbat." We  explained, she in Arabic and I in my best French, that we were not tourists but going to pray. One woman, standing in her doorway said,  "Ya'alah. (Go ahead.) Shabbat Shalom", came the response.

This vibrant city was once home to a Jewish population of thousands and thousands of Jews. Now only 100 remain and even those will soon be   diminished as young people leave for France,  Spain or Israel.  Where once kosher butchers abounded for the very traditional population, now the families either get their meat from Casablanca or from a shochet who comes in periodically to shecht poultry. Where there were hundreds of children studying at the Alliance Israelite, now there aren't enough children to make up a class.  The chazan of the synagogue explained, as we walked to his home for lunch with his family and some of our group, that the King, Mohammed VI, like his father Hassan II, supports and protects the Jews.  Ohayon's Marrakeshi family has been in Morocco for more than 1000 years.  He said that some Jews probably arrived shortly after the Second Temple was destroyed and long before the Jews were expelled from Spain in 1492.

At present, the entire Jewish population of Morocco has dwindled to only a few thousand at best whereas they were once most populous in any Muslim country.  Their place and their role in the Moroccan national landscape were well established until there was an almost total emigration toward new horizons in the mid-twentieth century. The main catalysts for this movement was the creation of the State of Israel in 1948 and the end of the French and Spanish Protectorates in 1956. By the 1960's, the social structures, economic activity, and cultural heritage of the Moroccan Jew, almost all of whom were traditional, had largely disappeared. In this rush, and in the unexpected vacuum that was created, many more Jews left to make aliyah or to establish themselves in France after the Six Days War. Soon, the preservation of the traces of age-old places and lifestyles was in jeopardy.

For our group visiting the cities of Casablanca, Marrakesh, Berber villages in the Atlas Mountains, Fez, Meknes and Rabat provided a valuable opportunity to view the magnificent Jewish artistry which flourished here - metals and textile arts, ritual objects and exquisite jewelry, synagogues, cemeteries, the winding narrow streets of the mellahs, the places were holy people were venerated, and the markets in the cities where they shopped, worked, and congregated.

Lately, there have been YouTube videos depicting a single man, wearing a kipah, walking the city streets in Paris, in two cities in England, in Berlin, Stockholm and Copenhagen.

In Berlin, there is no reaction to the man - neither positive nor negative. In the clip from Paris, we seen him walking through an Arab neighborhood and being cursed and spat upon. The same occurs in England. Only in Copenhagen, after the recent terrorist attack, do people greet him with "shalom" and a woman stops, turns around, and hugs him.

It would seem that Marrakesh, which completely charmed our entire contingent, was as safe a city in which to be a Jew as any in Europe; more so than most. And yet Mr. Ohayon told me that he rents his spacious apartment, provides hospitality to Jewish visitors like our group from around the world, but doesn't own it because he keeps all his assets liquid in case he needs to leave in a hurry.  It reminded me of the line in the beginning of the Book of Exodus. Right now, things are very calm for the Jews of Morocco. The King's picture hangs in every Jewish home, business and synagogue.  He is working very hard to modernize Morocco, deal with unemployment, and takes his role as "Commander of (ALL) the Believers" very seriously.  But it is clear that the Jews we met are fearful that a new Pharoah will appear "who knew not Joseph".

On Sunday we reluctantly left our delightful hotel and the sites, smells and exotic flavor of Marrakesh to head to Fez, once the capital of Morocco, and still the spiritual capital of Jewish Morocco. Over twelve hours, we slowly rode through the High Atlas and Middle Atlas mountains, stopping at a Berber village for a home visit and tea ceremony. Spring brought vivid green carpets of grass and wild flowers to the plains and hills of the area.  Cedar trees and juniper line the higher elevations, standing like sentinels, and gnarled olive trees are found in the lower valleys.  Old fortresses and watch towers dot the landscape of this beautiful country which has ocean, mountains, plateaus and desert.

By nightfall, we entered into Fez, the most extensive city in the Arab world, with a medina three times as large as the old city of Jerusalem. Fez, the place where Jewish scholars and Rabbis once walked the streets awaits.