The Jewish Federation, Foundation and JCC of Greater New Haven is your link to our global Jewish community. I was reminded of this as Steve Fleischman, Lisa Stanger and I participated on the Jewish Federations of North America FRD Mission to Ukraine and Israel this past week and travelled with 100 representatives from our North American system. While I won’t share all 10 days of experiences here, please check out the Jewish Federation’s Facebook page to see daily recounts with photos.

Our trip began in Kiev, Ukraine—in what used to be known as the Pale of Settlement, where Jews were permitted to live during the days of the czars—sometimes peacefully, most times under threat, pogroms and abuse. We literally walked into history with a visit to Babi Yar—a ravine where more than 35,000 Jews were shot and fell to their deaths. I had heard the stories of Babi Yar and in my mind I imagined it in some far away forest. It was stunning to realize that Babi Yar is right in the city, just steps away from homes. People assembled in the streets after being told to gather there with their belongings and then marched to the ravine where they met their end.

What transpired after that was a story of murder and survival. Many from Kiev fled to places like Siberia to escape. When they returned to rebuild their lives after the Shoah, they found themselves living under the thumb of communism and the Soviet Union where it was illegal to practice religion but their “nationality” was listed as Jewish on their passports. When the Berlin wall fell in 1991, a new Ukraine emerged from the shadows. But by that time, for many, their Jewish identity was lost. Some made Aliyah to live in Israel and others went about building their lives.

The Jewish Federation system was on the ground from the moment the wall fell and assisted the Jewish community who wished and was able to make Aliyah to do so.  For the most elderly or infirm Jews, the JDC immediately went to work to care for them in their homes and by creating Hesed centers to provide hot meals, medical care and support. JDC and the Jewish Agency for Israel stayed and decades later are assisting with a re-born Jewish community.

The last thing we did before leaving Ukraine for Israel was to visit a Jewish Agency summer camp program. Israeli music was playing, the place was covered in blue and white balloons and the teens were dancing and smiling. It could have been any Jewish camp in North America. But these kids were different from those in New Haven for one main reason. Most of them learned they were Jewish when they came to camp and asked why they were there. As we spoke to them we learned that they were on a journey of discovery and were loving every minute of it. In fact, one young man that I lunched with, Alex, learned he was Jewish two summers prior and was so happy to tell me that he was making Aliyah two days later. He was going on a special program where teens make the move alone with support of the Jewish Agency, learn Hebrew, serve in the IDF as lone soldiers and when they are established, their parents will hopefully join their kids in Israel. 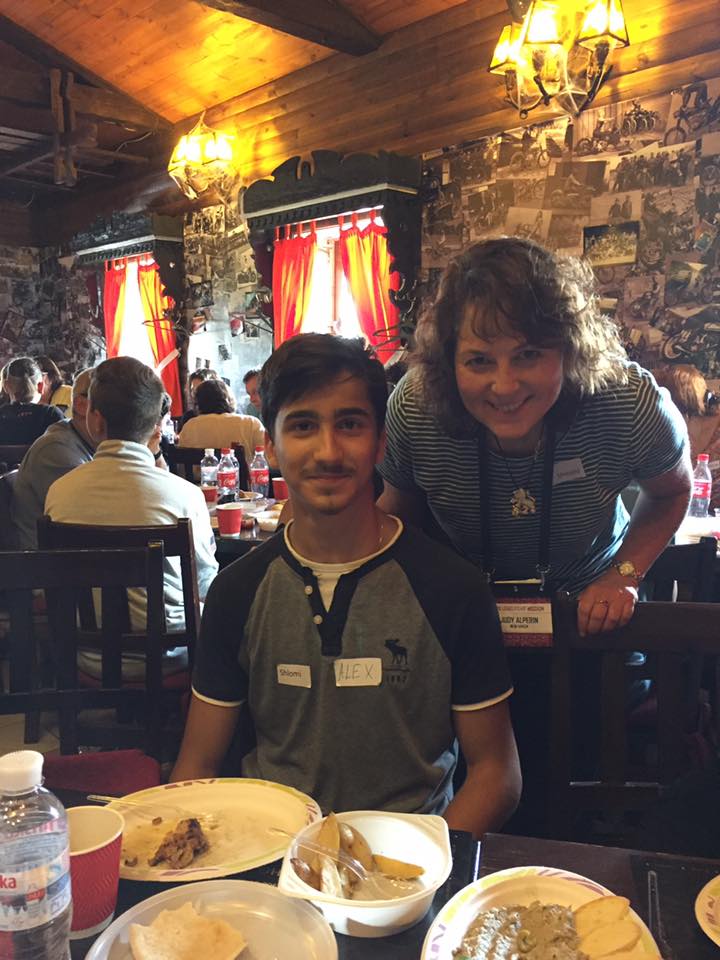 We had the pleasure of interacting with teens throughout the trip and took great inspiration from them and their bright hopes for the future. This was capped with our final days visiting our Partnership2Gether sister community, Afula where we met three teens and their madricha who were getting ready to journey to New Haven to spend 10 days connecting with campers at the JCC Day Camps. They could not be more excited to meet our campers and share what is great about Israel.

Camp is in full swing, the Israeli teens will continue to build on fun, and creative enhancement of Jewish and Israeli programming offered this summer.

The activity level at 360 Amity Road is wonderful to see. With campers and counselors frolicking on the campus and swimmers and racquetball players returned home to the JCC, progress toward a complete return is happening. Our architects, Svigals + Associates are working closely with construction managers, PAC Group. Every effort is being made to bring Yeladim back to begin the school year in the building and we are working as hard as we can to complete the restoration of the fire-affected portions of the building swiftly so that we can return to full operations in December. These are goals, not promises. However, we do believe that barring unforeseen complications, our goals are attainable.

We will celebrate summer with our final Grill n' Chill on Wednesday, July 26th. This season’s supper celebrations attracted record crowds. Don’t miss out on the fun.

If you haven’t already made your commitment to support the Jewish Federation’s 2017 campaign, please do so immediately by calling or emailing Director of Development, Amy Holtz—(203) 387-2424, ext. 254, aholtz@jewishnewhaven.org. This year more than every we are counting on each member of our community for their support. The campaign will close on July 31st. We need you, especially this year, with such difficult challenges in our community.