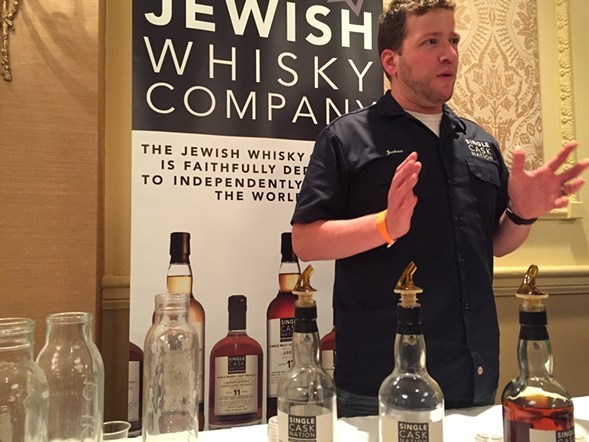 Joshua Hatton, of Guilford, first began his love affair with whiskey about 12 years ago at his synagogue, Temple Tikvah in Madison, when he tasted some from a bottle provided by one of his fellow congregants.

From that very first taste at temple, Hatton followed his bliss and helped create the very successful Jewish Whisky Company, which purchases single casks of one-of-a-kind whiskies from distilleries all over the world and sells the product to its members, known as the Single Cask Nation, as well as to select retailers and bars in six different states, including Connecticut.

The Jewish Whisky Company is run by Hatton, and Jason Johnstone-Yellin, who hails from Scotland but moved to the United States 15 years ago and currently lives in Virginia. Johnstone-Yellin’s wife is also Jewish and his sons are being raised in the Jewish faith.

So how does one become a whiskey expert? Hatton said it’s all about passion.”I think it’s like music or cooking,” he explained. “If you have the passion for it, then you want to learn everything.”

After writing his own whiskey review blog online, Hatton had an idea to start a whiskey company in 2011. Now, seven years later, Hatton says business is booming. “It’s going tremendously well,” he said. The Single Cask Nation now boasts more than 3,000 members nationwide and a Facebook page with more than 3,700 followers. Hatton and Johnstone-Yellin even do a popular podcast now called “One Nation, Under Whisky” that gets just under 14,000 downloads a month from whiskey aficionados all over the world.

If you’re wondering why the company does not use an “e” in whiskey, Hatton explains that most of the world, except for Ireland and the United States, spells whiskey without an “e.”

The Jewish Whisky Company offers whiskey from $80 to $240. The company also has a $10 flat-rate for shipping, which Hatton said is the best spirits shipping rate in America. Hatton said the reason the company offers whiskies as part of a membership is because it is just like being a member of a synagogue. “When you fall in love with a synagogue, you join the community,” he said. “You belong. It’s just like that with the Single Cask Nation.”

Because the company is called the Jewish Whisky Company, Hatton admits the question often comes up whether or not their product is kosher. First of all, he points out that when it comes to the kosher status of whiskey, to most of the United Kingdom, all whiskey is kosher by nature, but here in the United States, if the whiskey is matured in casks that previously held sherry, it can be considered unkosher. Hatton is able to defend his product by using a Talmudic argument. “If you are talking about kosher food and the tref component, the Talmud says that if less than 1/60 of the total is unkosher, everything is still good. If you can measure the amount of sherry in parts per million and our intent is not to make the whiskey taste like sherry, then that’s okay. The reason we use those casks is because European Oak has a certain taste.”

If people still argue that their product is not kosher, Hatton is fine with that and respects their decision, although he pointed out that 50 percent of the Jewish Whisky Company products are not matured in casks that once held sherry so they would not pose a kaishrut dilemma. “Believe it or not, most of the Orthodox community is fine with our products,” Hatton said. “They are very knowledgeable and understanding.”

“Our first goal is to teach people about whiskey, whether you are Jewish or not,” he emphasizes. “First, we are a whiskey company and second, we are a Jewish company. We bottle whiskey for whiskey lovers with Jewish people in mind. When you go online to join, there is a questionnaire to self identify and it asks about kosher concerns and only 40 percent of our members identify as Jewish.”