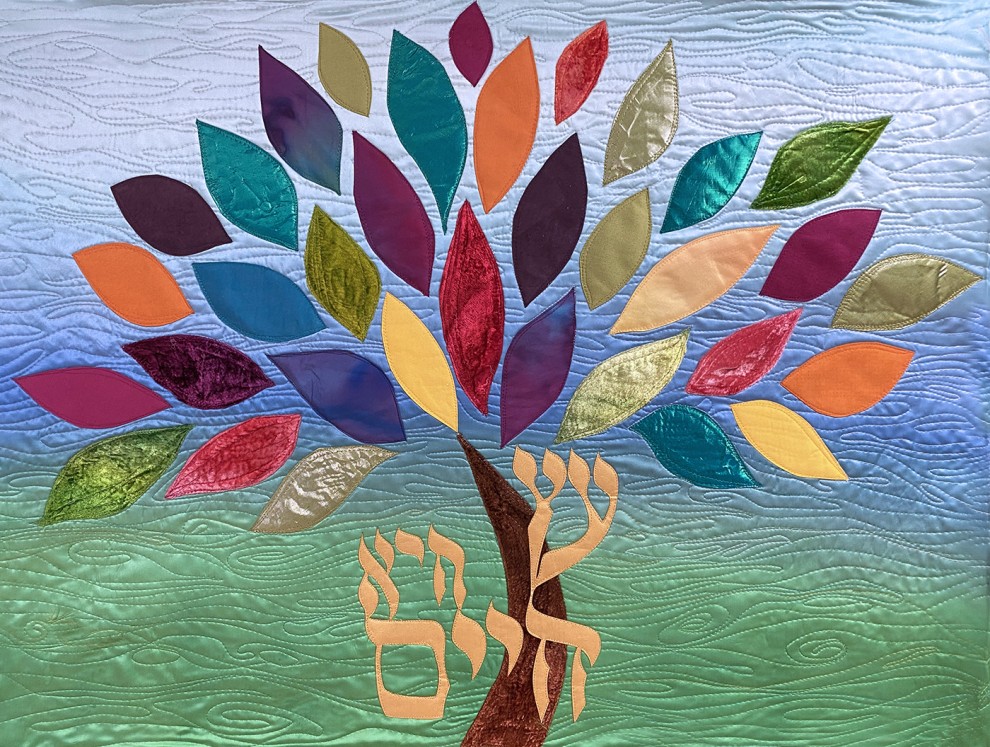 In that quintessentially Jewish way, it all started with a question. “What do you think about holding Max’s bar mitzvah at Camp Laurelwood?” my daughter, Suzie, asked in reference to the upcoming bar mitzvah of her son, my grandson. What do I think? Outside, amid the trees and the rustic cabins, on Shabbat chol ha mo’ed Sukkot? What could be more fitting, more perfect!

Of course, a bar mitzvah needs a Torah. And, as luck would have it, we did not have to look far because Rabbi James Greene, executive director of Camp Laurelwood, kindly offered to let us use the camp’s Sefer Torah.

Nineteen Tishrei 5782 (September 25, 2021) was a gorgeous fall day. The Torah was on the bimah, as promised. As soon as it was unrolled, it was obvious what an exquisite scroll it was. It turns out that this Sefer Torah was one of eight found, with some other ritual objects, in a storage unit where they had been stored when the former Jewish Home for the Aged in New Haven closed down. Nothing else is known of its background.

This particular scroll, written in Beit Yosef (Ashkenazic) script, needed only minor cleaning and replacement of patches and straps. Otherwise, though very heavy, it was declared by a sofer (Torah scribe) to be in fine condition.

The mantle of this Torah, however, was noticeably worn. Such a beautifully written scroll deserves a fine cover, and so, wanting to thank Rabbi Greene for his generosity, I offered to purchase a new cover for the Torah. Asked if he wanted something special, Rabbi Greene replied that he would like the image of a tree, representing the logo of Camp Laurelwood, to decorate the cover. He got in touch with the artist Jeanette Kuven Oren, who came up with a design that honored the Torah and was fitting for the camp: a tree bursting with vibrant, colorful leaves and the words Etz Chaim Hi floating across its trunk. We loved it!

Meanwhile, I had been talking to Caron and Norman Alderman, about the project. They were immediately enthusiastic and wanted to participate. So here we were, three kvelling grandparents desirous of commemorating our grandson’s becoming a bar mitzvah, and for whom the camp and the Torah have special significance.

Caron and Norman have been long-time supporters of Laurelwood. Not only was Norman a camper from 1950-54, he was 'Camper of the Year' in 1953. The Aldermans’ sons, Jason and Ian, were campers and then staff in the 80s and 90s. Norman was on the board and served as president from 1983-84. He raised funds to build a second swimming pool, and, along with other family members, donated a super-senior cabin in memory of his father, Abraham Jacob Alderman.

It is important to Caron and Norman that children, whose families don’t have the means, have the opportunity to experience Laurelwood. To this end, they support the camp financially on an ongoing basis. Norm and Caron also established an endowment in 2021 for the benefit of Camp Laurelwood, the Norman and Caron Alderman Fund for Camp Laurelwood at the Jewish Foundation.

I am a ba’a’lat qri’ah (a congregant who chants the Torah reading at services), initially self-taught, later studying with Lee Rothfarb, then a graduate student in music at Yale. Reading Torah is for me a deeply moving and completely absorbing experience; I love the melodies, cadences, the words, and the physical scrolls. That passion led to a career in Biblical Hebrew, which to this day still occupies my heart and mind.

Of all the teaching I have done, no endeavor equaled the thrill of preparing my grandson for his bar mitzvah. Being with him on the bimah as he took the yad (pointer) and began to sing “Va’yomer Moshe….” Well, it was hard not to cry from the thrill and joy of experiencing, enacting l’dor va dor.

The new Torah cover is even more exquisite than the sketch promised. We who were involved in its coming to be are thoroughly delighted.

But what about the cover it is replacing? Surely it served many years and merits kavod. Rabbi Greene has promised a place for it in the ark at camp as another piece of Laurelwood’s long and vibrant history. “It will not go unnoticed,” he promised. And that is as it should be.