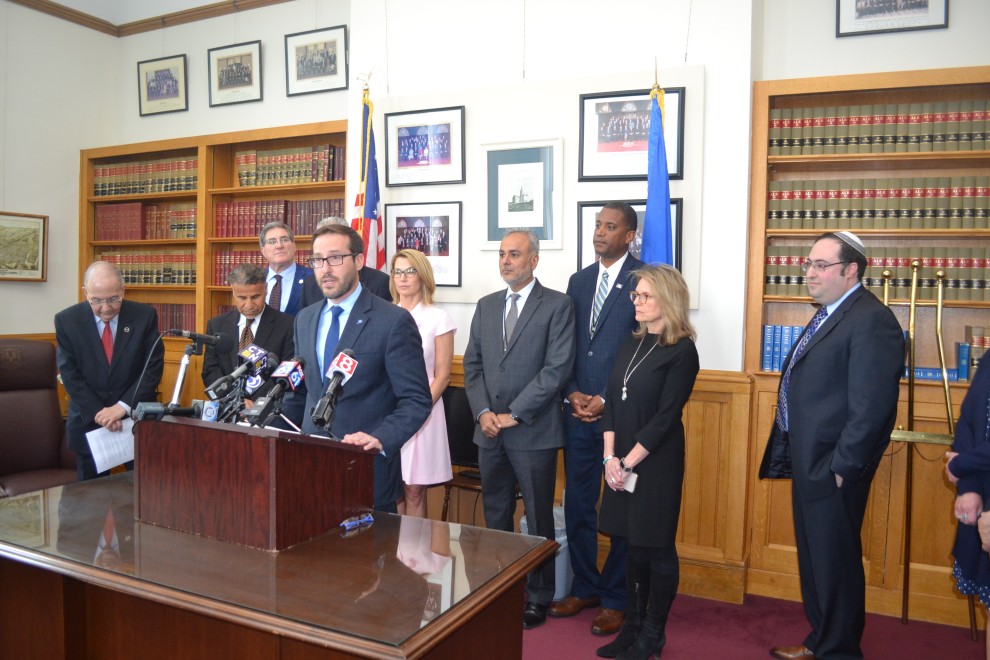 The Jewish Federation Association of Connecticut stood with leaders from the Muslim and Catholic community as well as a group of bipartisan legislators to propose setting aside $5 million in the upcoming state bond package. If the proposal passes, funds would help the congregants of Connecticut synagogues, mosques and churches remain more secure from domestic hate groups by installing various security measures such as remote door entry systems, video monitoring systems, and shatter-proof windows – the same type of improvements the state offered public schools in the wake of the 2012 Sandy Hook shootings.

Judy Alperin, CEO of the Jewish Federation of Greater New Haven was at the press conference meeting which took place in the Capital on May 14. "I am honored to be a part of the effort to secure our houses of worship. I only wish it wasn’t necessary," she said.

JFACT Executive Director Michael Bloom said, “The State of Connecticut has a crucial role to play in public safety so we are grateful that they are supporting this funding request.  Security cameras, doors, and keyless entries are expensive, and the money is just not there in many houses of worship’s budgets.”

Senate President Martin Looney said, “This grant program for houses of worship would be a competitive grant similar to the program run by the state for public and private schools to enhance their security.”

“We’re seeing a lot of attacks on Jewish, Muslim and some Christian churches across America, and some right here in Connecticut. These attacks strike at the heart of our social fabric, tearing at people’s faith in the very places where they should feel secure and at peace,” Sen. Slap said.

“Churches, synagogues, mosques and temples are pillars of our communities where people gather, joining together as one. In this current environment, where religious groups may feel threatened, this bonding will create a sense of resiliency and protection. Irrespective of the situation in New Haven, we must show everyone in our community that we are strong, and join together as one people," said State Senator Saud Anwar.

Yesterday’s announcement comes after several high-profile incidents at Connecticut mosques and synagogues, including – most recently – last Sunday’s arson at the Diyanet Mosque in New Haven.