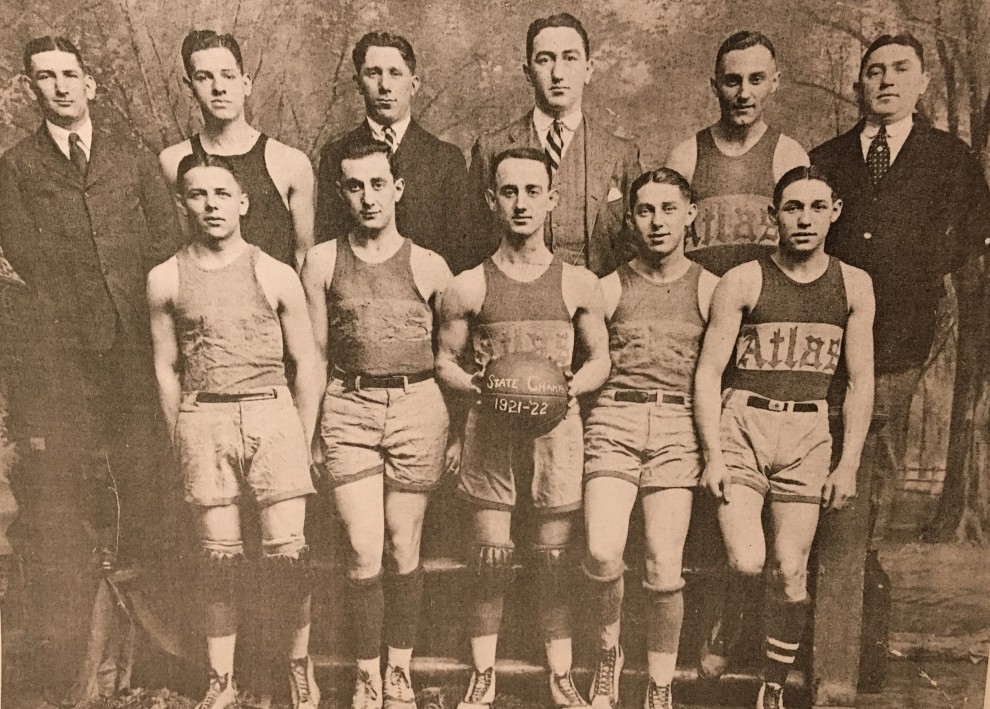 The Atlas Club was organized in 1906 by a group of six young men. The founders were Irving Albert, Phillip Greenberg, Samuel Levi, Maurice Bailey, Sam Greenberg and Sam Savage. The club became unified in 1913. In 1916, the club was incorporated.

Its most significant achievement was the creation of a championship basketball team between 1920 and 1924. They won not only city championships, but the state and regional ones as well. In New Haven, they were the champions from 1912 to 1926. From 1919 on, the team was coached by Maurice Bailey.

Dr. Joseph Weiner, a member who went on to become the first Jew on Yale’s varsity basketball team, said the club played in cities where an allJewish team had never before been seen.

“We looked upon ourselves not simply as another team of players, but also as a group of goodwill representatives on behalf of the Jewish community. We were shattering the stereotype of the ‘nebbich’ Jew.”

The Atlas Club’s first meeting rooms were at the Boy’s Club on Chapel Street. They then moved to Wentworth Hall in 1914, remaining there until 1916 when they moved to 191 Church Street. In 1923, the club bought the home of Mr. Sperry at 308 Whalley Avenue. The clubhouse was dedicated in May of that same year.

Many members of the club were rooted in the Jewish community. The Greenbergs were sons of a rabbi. Joe Weiner’s father was a shammos. Ben Witkin’s father was a shochet. As firstgeneration Americans, they believed that they represented not only their club, but the Jewish community as well. None of their fathers or grandfathers before them had been athletes in their youth. Basketball also helped some of the members go up the educational ladder with at least six team members going on to Yale University. Another founder, Jacob Podoloff, was the owner of the New Haven Arena and a top professional sports figure.

The Atlas Club disbanded in 1931. Every two or three years, a reunion was held despite the fact that the club no longer existed, but it still held on to the Jewish “mystique.”

It was through their efforts that the first generation of American born Jewish men became integrated into an important aspect of not only American life but Jewish life in New Haven by becoming competitive athletes.