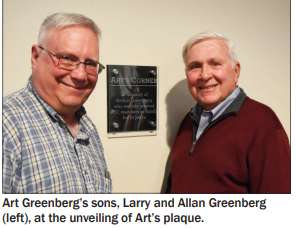 In the presence of loving JCC members, family, and friends, the JCC unveiled a plaque honoring Arthur Greenberg, who warmly greeted members as family for 18 years.

Art Greenberg passed away in January at the age of 96. He was a constant and inspiring presence at the JCC as a member, father to the JCC of Greater New Haven’s Director of Health and Physical Education Allan Greenberg and, for the past 18 years, a dedicated employee. Art greeted and assisted thousands of members as the early morning “face of the JCC”. It is no stretch to say that Art was beloved by the morning workout crew and his own exercise regimen was an inspiration to all who wanted to know the secret to Art’s longevity.

Art served in the Navy during World War II in brave service to his country aboard the USS Tuscaloosa and participated in the D-Day invasion of Normandy, which hastened the Allied victory over Nazi Germany. He raised his family of three boys, Larry, Allan and Mark, in the New Haven area, and in his later years became a fixture at the JCC. Art’s introduction to exercise began more than 30 years ago when the JCC launched a successful program addressing the fitness needs of sedentary seniors; Art and his late wife Rose became enthusiastic participants.

Art’s memory will be a blessing to all who knew and loved him.