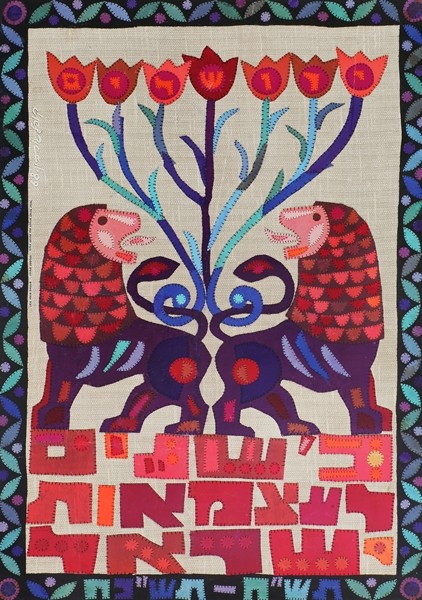 As Israel celebrates 70 years of independence, we are delighted to share in the celebration by highlighting its important contributions to the world in technology, medicine, science, music, art and culture. Look for interesting stories about the State of Israel in each issue of Shalom New Haven in 2018.

Since its inception, and even prior to its establishment as a state, Israel produced a special banner for each of its Independence Days (with the exception of 1957). A prestigious competition is launched each year to select the winning poster which best reflects the shared values of the state and the uplifting spirit characterizing Yom Ha’atzmaut. A review of the banners though the decades takes us through some of the pivotal moments in Israel’s history and the country’s journey to maturity. What will the poster of the 70th Independence Day look like? Stay tuned. 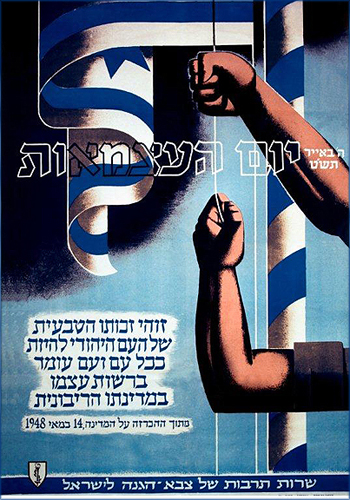 National solidarity is reflected through this image of strong hands holding the flag in a social realism style. The passage is from their Declaration of Independence: “It is the natural right of the Jewish people to be masters of their own fate, like all other nations, in their own sovereign State.” 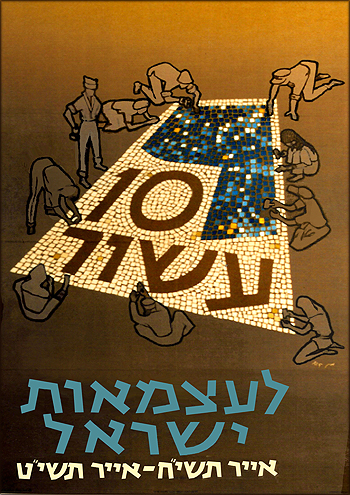 A sense of euphoria characterized the period. As more immigrants found their way out of refugee absorption camps and into permanent dwellings, Israel was slowly coming out of austerity. Some immigrants experienced economic welfare, with compensations from Germany pouring in. The political sphere was stable under Ban-Gurion’s leadership and the borders were relatively calm. The letter “Yud” in the poster represents the number ten, and ten people are working as one in the mosaic that is the state of Israel. 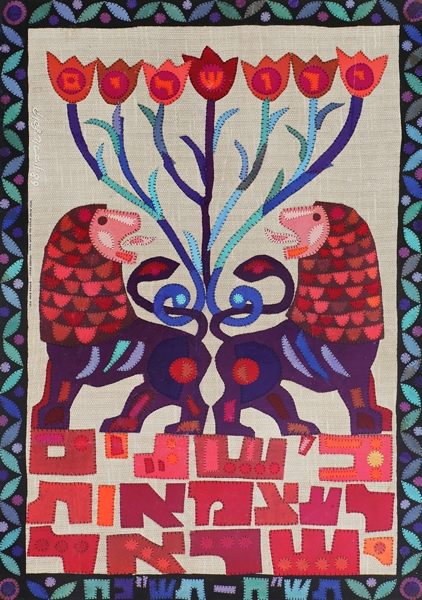 The menorah with the guarding lions on each of its sides has been a central visual element in Jewish iconography and particularly in Jerusalem. The unification of the city in 1967 gave way to its inclusion as an expression of Israel’s sovereignty. The menorah is depicted as a living plant with the word “Jerusalem” spelled in Hebrew across its flowers. 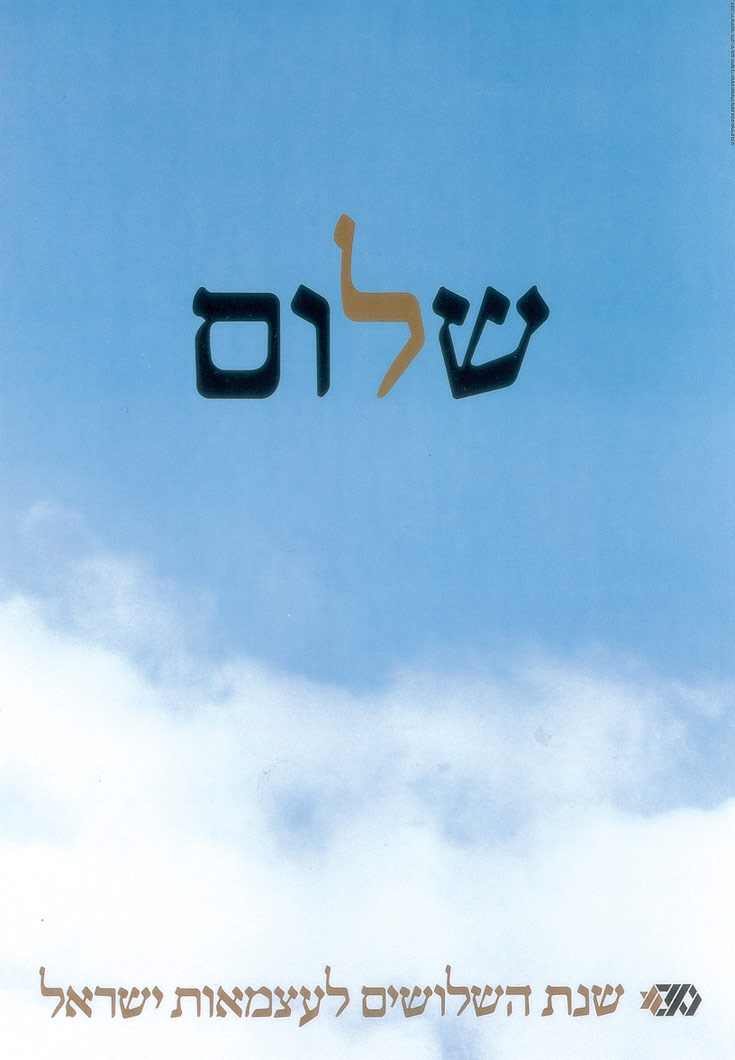 This minimalist poster features the word “Shalom” (in Hebrew) in black, with a golden “lamed”, which means 30, over a blue sky above white clouds. The typography is based on ancient Sephardi calligraphy, which was designed by Eliyahu Koren for his Tanach (bible) edition. Later, it would be used again by Tartakover to make the logo for Peace Now. The poster was created in the context of the peace talks between Israel and Egypt, the first peace-talks ever between Israel and an Arab state. The age-old yearning for peace was reflected in the posters only after the Yom Kippur War. It is possible that peacemaking seem so unattainable, resulting in the focus of building, settling, and planting the land, which also reflected the need of the hour. 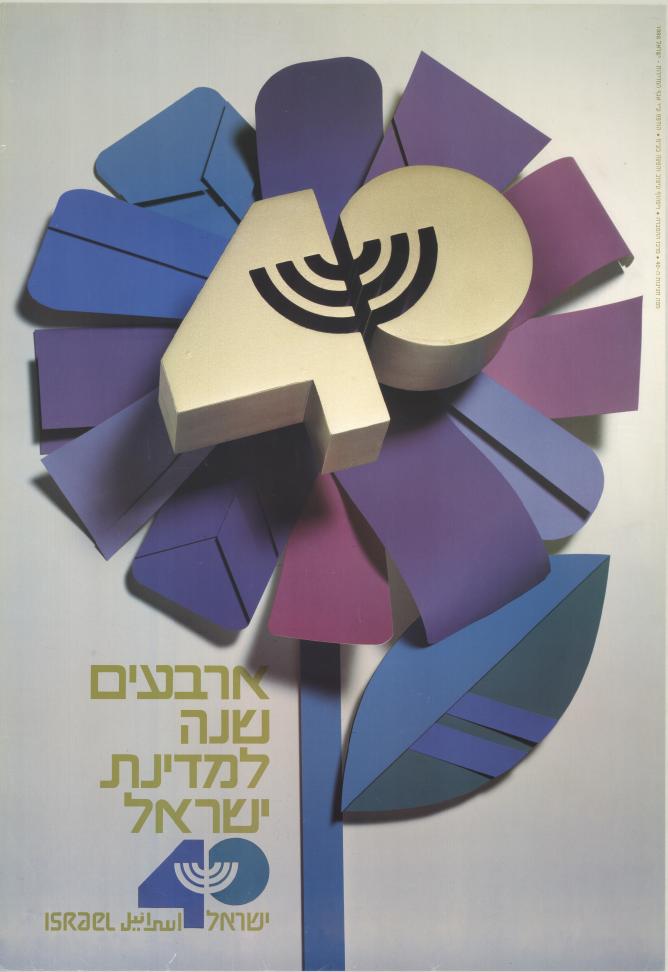 The logo of Israel’s 40 Independence Day, a stylish menorah stamped on the number 40, is positioned as the center piece of a bright and colorful flower which has 12 petals. 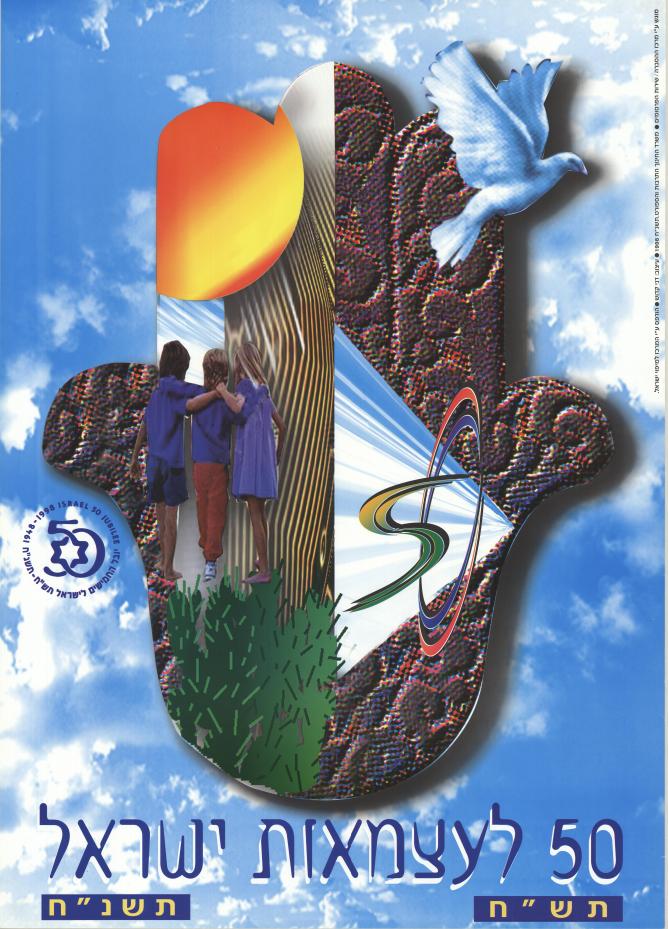 Originally representing MiddleEastern and Northern-African traditions, the Hamsa (hand) became a symbol for multiculturalism in Israel. In this poster it features different textures, perhaps reflecting the diverse cultural traditions which make the Israeli society. While instilling a sense of unity and homogeneity was critical in the early days, the Israeli society became increasingly comfortable with reflecting cultural diversity. The dove can be interpreted as a yearning for peace - not between Israel and its neighbors as much as between the state and its citizens, or the different facets of society: left and right, secular and religious, mizrachi and ashkenazi. 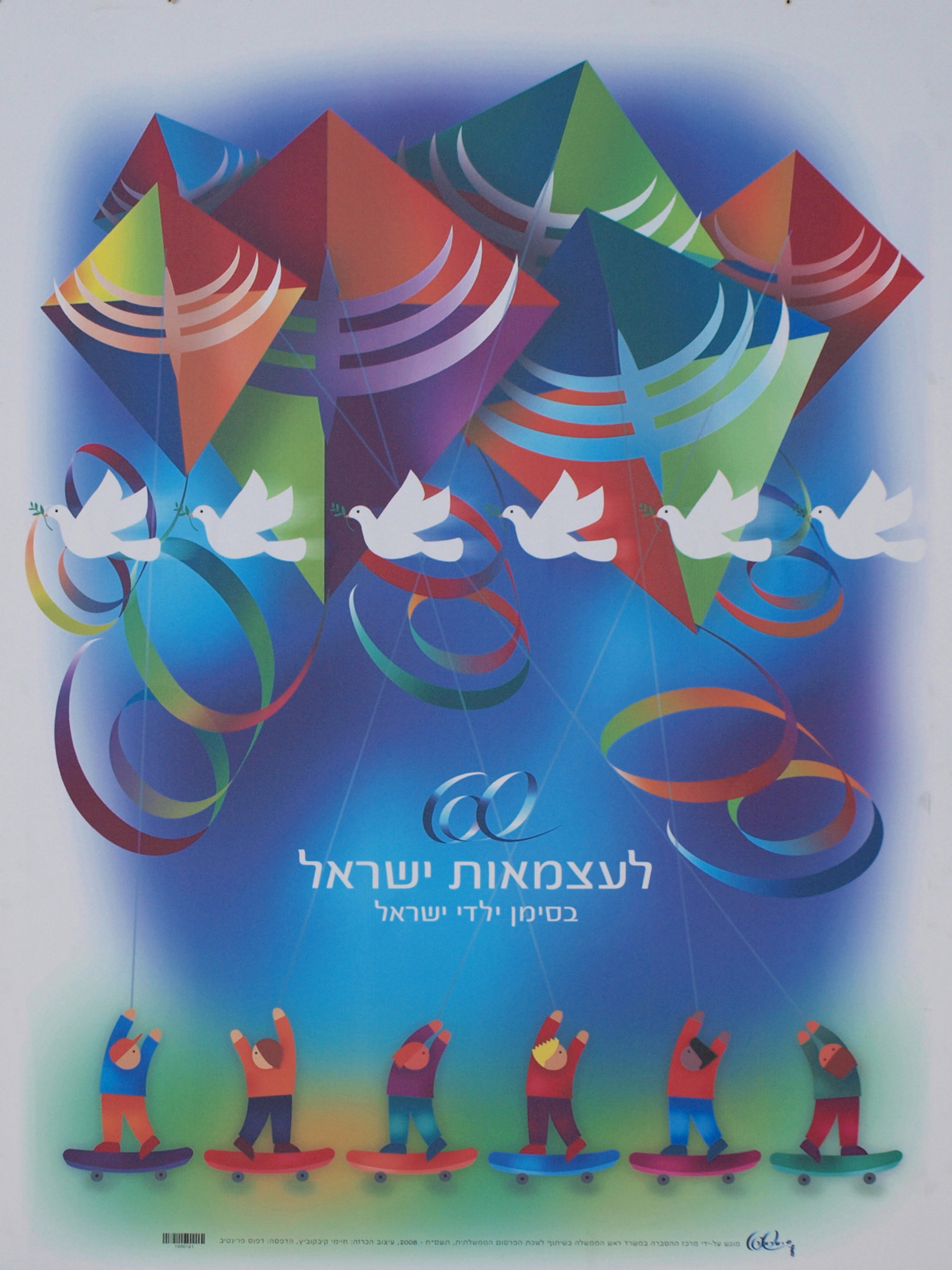 With “children of Israel” as the theme for the 60 celebrations, this poster presents six children, each flying a kite decorated with the menorah, Israel’s national symbol. The tails mimic the 60 jubilee logo, which is also present at the middle of the poster, in blue. Images of children have been used in past posters as well as in this one as a symbol for the future of Israel. The doves, a symbol for peace, convey a unifying message connecting heaven and earth, people and state, the present and the future.