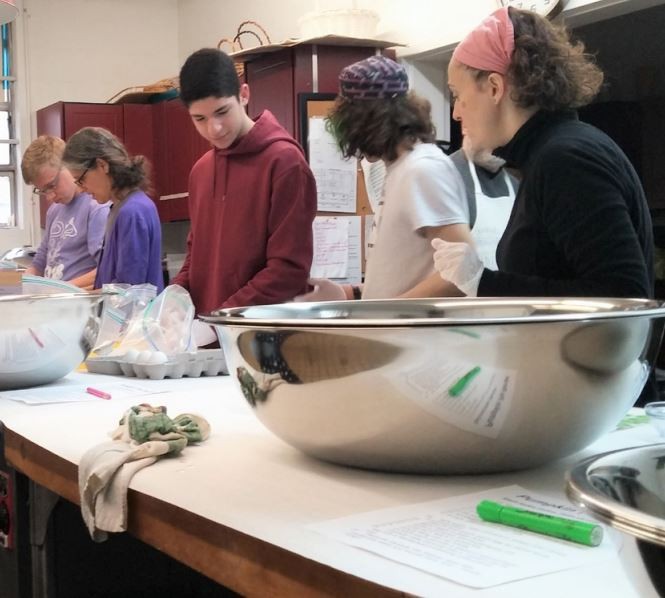 One of the greatest mitzvot that a small community is capable of doing is coming together for Tikkun Olam (helping the world) and helping those in need. BEKI USY’s spring service project was working at the April 7 JCC Mitzvah Day, to which we invited USYers from the CT and MA region.

A total of 125 pies were made, and 54 were donated to the JFS Food Pantry, along with $660. When ordering pies, members of the community had the option to order or donate pies, or to give money, and it was wonderful that so many people were so generous.

The pie making was a group effort that required everyone possible to pitch in. During each pie making session, over a dozen volunteers showed up. Encouraging children to give back to their communities through youth groups is very important, and BEKI is lucky to have so many devoted kids and parents.

One Youth Commission volunteer, Rebecca Weiner, said she joined the pie-baking to provide a service to BEKI and the larger community and, in her words, because “to me pie-baking is a sweet way to bring home to our kids the many forms that Tikkun Olam can take.” Eva Shragis, who is a parent of former members of USY, has supervised the piemaking for the past few years. She said she views the project as a team building effort for everyone, in addition to a charity event, and she enjoys seeing new teens take on responsibilities within their community. She noted that this project is a great way to reach out to everyone at BEKI and beyond. “The pies I have bought through this program,” she said, “have made their way to Pennsylvania, Florida, New York, and California for our family Thanksgiving celebrations.”

Thanksgiving pie-baking is one of the many things that BEKI does in the service of others. In recent months, the synagogue has served food at Columbus House, helped out with Chapel on the Green, provided refuge for the homeless with Abraham’s Tent, as well as other projects.