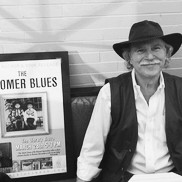 Dick Caplan, the President of Beth Israel Synagogue in Wallingford, is hard at work writing his very first novel of fiction, called “Saturday Afternoon Swamp.” Caplan hopes his novel will be released early next year.

He describes “Saturday Afternoon Swamp” as an imaginative, tall tale told at first by a young boy and then later by the same person as a young man as he recounts his adventures, his relationships and his failures and successes in life.

His first book, a creative memoir called “The Boomer Blues,” was released last year and delved into what it was like for Caplan, who was born in 1949, growing up in the small, idyllic town of Wallingford during the 1950s and confronting the tumultuous times of the sixties and seventies.

The grandson of Eastern European Jewish immigrants, Caplan recounts how his father grew up with the sting of anti-Semitism and prejudice. But unlike his foreignborn parents, he was an American boy who sought and found the American Dream.

Caplan wrote and edited most of his memoir during a six-year period, writing from 4 -6:30 a.m. daily for seven days a week. “It was one of the most enjoyable processes I have ever experienced,” he admitted. While Caplan has written many short stories, “Saturday Afternoon Swamp” is his very first novel. “I think I wrote the memoir for my father, as well as for myself,” he admitted, “but the novel is for me. It’s mine.”

Caplan describes his writing process in general as slow and challenging, but enjoyable. “I rewrite often and with gusto.....until I think I get it right,” he said.

Caplan served as president of Beth Israel for several terms in the mid-1980s and is now in his second year of his new term as president again. He has been a member of the synagogue for his entire life. His grandfather was a founding member early in the 20th century.

While Caplan admitted that he is not particularly observant, he said he certainly follows a sense of spirituality. “For religion, I practice kindness - something I heard the Dalai Lama say when asked what his religion was,” he said.

“I am president to help if I can ....to help others or get out of their way,” Caplan said. “Beth Israel Synagogue is a welcoming place of worship that follows a kind of Jewish Conservative flavor but makes room for many passengers who journey with good intentions and a real curiosity for warmth, acceptance, community, and spiritual connections.”

Jewish authors Caplan has read and enjoyed include Saul Bellow, Philip Roth, Joseph Heller and J.D. Salinger, but his favorite is Bernard Malamud. “’The Fixer’ was delicious,” he admitted.

Caplan was born in New Haven and grew up in Wallingford. He graduated from Antioch College in Ohio in 1972 and Smith College School for Social Work in Massachusetts in 1980.

He intended to travel and be a writer, but returned to Wallingford to help his mother when his father died in the winter of 1974. Caplan has spent more than 20 years working in mental health and social services and over 30 years in private practice. He is also an entrepreneur and businessman.

“I started out in the 1960s planning to be a writer… .a young, rich and famous one of course, you know like Hemingway or Fitzgerald, “ Caplan said, “but was derailed by life happening.” Caplan is living proof that it’s never too late to follow your dreams.