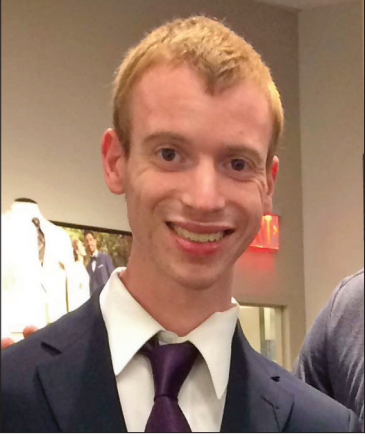 If you walk the halls of the JCC regularly, you come to learn who’s who. You recognize people that work in the café, at the front desk, or even behind the scenes, in different offices scattered throughout the building.

Recently, there have been new faces added to the mix.

This past year, the JCC of Greater New Haven served as a job training site for students from Chapel Haven Schleifer Center, a residential school and independent living community for adults with cognitive disabilities. The Inclusion Program, run by JCC’s Group Program Manager Emily Kurz, partners with Chapel Haven, to have students come to the JCC and intern in departments like facilities and marketing.

Robbie Marcus is a member of the inclusion program. Twenty-five years old, this is Robbie’s third job, previously having worked at Walgreens and as a camp counselor. When the opportunity arose for him to begin at the JCC, he knew exactly what he wanted to do. “He’s a problem solver,” Kurz said, “so a job in facilities fit perfectly.”

Robbie’s supervisor was Chris Serio, facilities manager at the JCC. “The relationship between Robbie and Chris was indescribable,” Kurz explained. Paul, Robbie’s father, couldn’t agree more. “Chris was spectacular. He had a perfect balance of making sure Robbie delivered on his duties while also understanding how a person with special needs works.”

Robbie’s job was to pioneer a “preventative maintenance” program: instead of waiting for something to go wrong, Robbie performed weekly inspections, trying to catch a problem before it became one. Going around the building with a checklist, he noted when he saw something that wasn’t right.

Soon, the check list became obsolete. “He asked me, ‘if I find something that’s not on the checklist, can I still tell you it needs fixing?’” Chris said. Kurz noted how much maintenance improved with Robbie working. Light bulbs were changed more often, expired fire extinguishers replaced, alarm systems fixed, and sagging ceiling tiles removed.

Chris explained that Robbie didn’t need much more help than anyone else might. “The knowledge was all there,” he said. “The accommodation part was more along the lines of writing and carrying things, so we found ways to make it easier so he wouldn’t get frustrated.” With limited use of his arms, carrying a clipboard was difficult. Chris and Kaitlin Salisbury, Robbie’s aid from Chapel Haven, came up with an alternative solution: Kaitlin followed Robbie on his inspections and wrote notes when he told her to. Chris said that when Robbie comes back to the JCC, he’ll look into getting him an iPad, making him even more independent.

Watching Robbie succeed in the program has been an incredible experience for anyone who’s met him. “You’re only as happy as your least happy kid,” Robbie’s dad said. “All you can hope for your kids is that they find something they love that they’re good at. I’m happy he’s found that.”

And Robbie? He couldn’t have had more fun if he’d tried. “I loved working with Chris, and I’ve made so many friends at the JCC,” he said, “everyone is so nice to me.” He hopes to come back in the fall and volunteer.