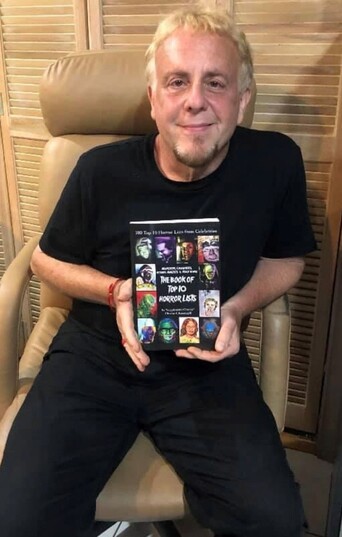 Best known as a popular local deejay/emcee and owner/operator of Club Kosher tours, Rosenay has now added author to his list of accomplishments, with publication of his new book, The Book of Top 10 Horror Lists.

The book is a compilation of lists written by 100 celebrities, many of whom are Jewish friends of the author, including the late actor, Ed Asner, and actors William Shatner, Karen Black and Irwin Keyes, Rock and Roll Hall of Famer Elliot Easton of the band The Cars; comedian and author Laurie Jacobson; and so on. Also contributing lists were a Beatles, a Karloff, a member of the rock band The Monkees, and a Munster from the popular ‘60s TV show.

Rosenay, who is also creator and organizer of the annual “Magical History Tour” to Liverpool for Beatles fans, and the Dracula Tour to Transylvania (Romania), a “vampire vacation” that brings fans to the land of Vlad the Impaler and Dracula, has acted in many horror films.

He wrote the book when the pandemic sidelined his DJ/MC business. The idea for a book of lists from an online newsletter he wrote, called “National Horror Happenings,” which included an occasional Top 10 List written by a celebrity. In most cases the list focused on their favorite monster movies. Others, however, listed scariest scenes in horror films, funniest scary movies, silliest horror scenes in horror, and so on. Within a short time, there were lists from actors, rock stars, authors, athletes, horror icons, directors, producers, scream queens, radio and TV personalities, and other pop culture luminaries.

A native of the Bronx, New York, where he studied at a yeshiva, Rosenay lives in Orange.

Of his new book, Rosenay says, “You won’t believe the actors, singers, musicians, horror figures, writers, film-makers, artists, composers, disco divas, sports figures, and others who are horror buffs and “monster mavens! Will your favorite horror films show up on any of their lists?“