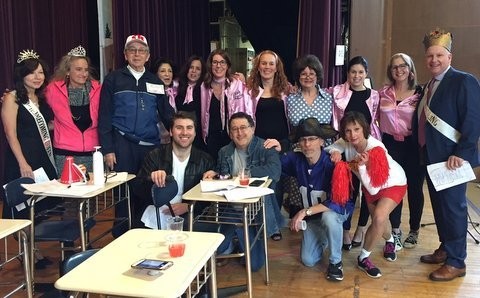 On March 20, Erev Purim, B'nai Jacob presented a Shpiel entitled "Schmaltz", a play modeled after the Broadway show "Grease". The story is set in Shushan High School, and the plot follows the ancient Purim story of Mordecai, Esther, and Haman.

As the tale goes, Hey Man plotted with the king to do away with all the Jews in the high school, ignoring the fact that the prom king has made the Jewess Esther his prom queen, and her uncle, Mort Chai is the football coach. The Jews in the school are all on the debating team and practice their religion faithfully.

The play was advertised as being inter-generational, featuring actors from age 85 to high school students.