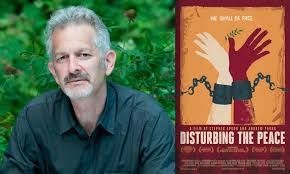 Members of the BEKI (Congregation Beth El–Keser Israel) Israel Study Group (BISG) and Mishkan Israel’s Social Action Committee are hosting a free community screening of the film “Disturbing the Peace,” on Thursday, Sept. 14, at 7 p.m. at Congregation Beth El–Keser Israel, 85 Harrison St., New Haven. The screening will be followed by a Q & A with the film’s producer and director, Stephen Apkon. Light refreshments will be served.

The film documents the evolution and work of the organization Combatants for Peace, which is comprised of Israeli soldiers, many from elite units of the IDF, as well as Palestinians who have served prison sentences in Israel, who have joined together to seek a nonviolent end to the Israeli Palestinian conflict.

“Disturbing the Peace” was a New York Times Critics Pick, an official selection in the Jerusalem International Film Festival, and the winner of the Ebertfest Humanitarian Award.

The BISG was formed in the spring of 2016 by BEKI members who love Israel and wish to support it as a Jewish and a democratic state. Contact Steve Fraade at: steven.fraade@yale.edu for more information.