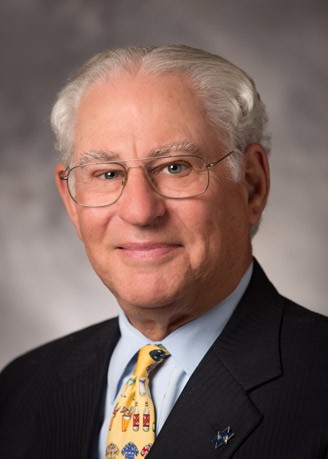 Stephen Saltzman is greater New Haven’s newest member of the Star of David Society. The Society, a national designation through the JFNA (Jewish Federations of North America), includes a distinguished community of donors who have committed at their local Jewish Foundation, $200,000 or greater to PACE/LOJE (designated funds to endow a donor’s Jewish Federation annual campaign gift) or $500,000 or more in other designated funds.

Saltzman has established five different funds at the Jewish Foundation of Greater New Haven: for the benefit of the Jewish Cemetery Association, for the ADL (Holocaust Education) a PACE fund (Perpetual Annual Campaign Endowment) to endow his Federation gift, and a LOJE (Lion of Judah Endowment) fund to endow his late wife Marilyn’s Lion gift to the Federation campaign. He also has a donor-advised fund. “The LOJE fund was my first,” he shares, “as it was so meaningful to her that I wanted to make sure it was fully endowed. I set up the PACE fund after to make sure there was an endowment to cover my annual pledges, for the present and into perpetuity.”

Saltzman, a principal member of the law firm of Brenner, Saltzman & Wallman, LLP, recalls how he was rapidly drawn into our community after moving here from Providence, Rhode Island fifty-five years ago. "I like to think I’ve been involved in the beginning of so many things for Jewish New Haven,” he says. From “accompanying Murray Lender by airplane from NY to Moscow, Vienna and Israel” as part of a Russian-Jewish resettlement project, to “being at the historic meeting when Tower One was approved”, to attending meetings establishing The Jewish Cemetery Association, the local ADL chapter--gave Saltzman a front-row seat to, “pivotal events during my watch that I became very proud of”.

From 1987 onward, he served on boards of key organizations dedicated to NH Jewish causes. These include terms as Chair of the Jewish Foundation of GNH, Campaign Chair and later President of the Jewish Federation of GNH, Founder/ Director of the Jewish Cemetery Association of GNH, President, Horeb Lodge, B’nai Brith, Director at Congregation B’nai Jacob, Board member/Chair of CT Regional ADL, and member of the ADL’s National Commission.

“No one can match Steve for his dedication and service to ADL Connecticut,” says Steve Ginsburg, Director of Connecticut ADL. “He has been on the ADL Board over 50 years… the longest-serving leader in CT - and one of the longest nationally. His perspective on today’s challenges and opportunities is invaluable. Steve is known by ADL staff and lay leaders for his commitment to standing up against anti-Semitism, interest in building bridges with other communities, support of Holocaust education, keen wit and sense of humor and love of world travel”.

Saltzman emphasizes why his Foundation funds, “reinforce the importance of endowing these worthwhile institutions. This stems from being proud of my Jewish heritage and wanting to sustain it in whatever way I can…in this case, for my New Haven Community that I’ve been in most of my life.”