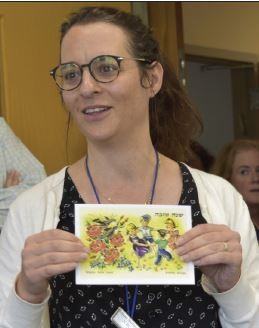 By Eliraz Shifman Berman, Director of the Jewish Community Relations Council and Center for Jewish Life and Learning.

Starting my journey back to Israel after spending three years in the Greater New Haven Jewish community brought me to once again reflect on the connection between Israeli and American Jewry. As a “professional Jew,” I have been asked in different forums what is the nature of the relationship between the two communities. “What should our communities learn from each other?” I've been asked. “What should be the proper contract?”

These kinds of questions increase as our communities face many challenges nowadays. One controversial issue is the upcoming annexation/applying sovereignty of Israel over parts of the West Bank. The response to this plan threatens to widen the gap among the Jewish people.

Few paradigms have been offered in the past as to what the “contract” should look like. I will briefly mention two of them.

In Israel’s first years, due to the post-Holocaust currents, it was perceived as a place of shelter for persecuted Jews, a safe home for a homeless nation. Nonetheless, Israel couldn't have built itself without the huge philanthropist support from American Jewry. A contract was shaped; Zion will be the safe home, and the wealthy Jewish community in the US will help build it.

In some ways, this paradigm prevails. But after a few economic crises in the US—most recently related to COVID-19—and given Israel’s strong economy, some argue that US Jewry should rethink their philanthropic strategy considering the needs of the local community. In addition, many argue that even though we are now experiencing a growing number of anti-Semitic incidents, the US is still a safe place for Jews. Most don't experience any mortal threat and feel safe here, sometimes more than Israeli Jews.

If the first paradigm was of physical and survival exchange of needs, the next paradigm is of belonging and identity. With a growing alienation of young Jews from their Jewish identity, some say a visit to Israel can strengthen it. A week with Taglit (Birthright) in Israel can often be as meaningful as several years of Jewish education. In return, American Jewry brings to Israel the pluralist notion that “there is more than one way to be Jewish.” This enriches the Orthodox Israeli mainstream.

Having said that, research shows that Israelis who visit America also strengthen their own Jewish identity. As many say about the emissaries’ experience, they come here to the US as Israelis and return as Jews. In other words, maybe something about traveling outside your comfort zone, and understanding new ideas and different kinds of Jewishness might contribute to their Jewish identity. It goes both ways. Others might challenge the supremacy of American pluralism. While American Jewry are more exposed to non-Orthodox streams, Israeli Jews are intensively exposed to ethnic differences and social-economic diversity within the Jewish community. Israel seems more inclusive in this regard. Moreover, Israel has a lively Jewish renewal movement.

Apparently when we come to think about Israel-US Jewry relations combined with a contract notion of give and take, those paradigms collapse in some way. It often leads to places of interests and power struggles.

But if we think of this question a bit differently and ask not how but why should we learn from each other, we remind ourselves that we are an extended family. Like all families, we care about each other even if we sometimes have bitter disputes. As family, we want to know each other, to deepen our love for each other, to care. What if we asked not what we should learn from each other but rather focused on how we can learn about each other? Instead of building a contract, we can start rethinking our covenant through the willingness to learn more about our sister community.

The steps that Israel is possibly going to take soon could also be an invitation to listen and hear the pain, frustrations and fears from both sides of the ocean. It is a chance to nurture our empathy and understanding as a first step. On this basis, we might be able to revive the relationship between our communities.

As I go back to Israel, I will take all I have learned here and will share with others my love to my extended family on both sides of the ocean. Le’hitraot!