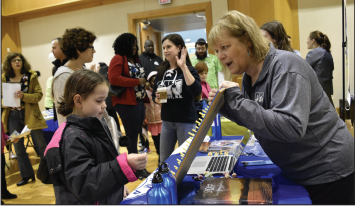 Families had the opportunity to meet with a range of Jewish camps including reform movement and conservative movement camps, a sports camp, a beach camp, a science camp, a labor Zionist camp, a Chabad camp, an environmentally sustainable farm camp and more. In addition to the camps, there were prizes and tons of fun JCC activities including climbing wall, MakerSpace, and kosher s’mores.

SAVE THE DATE FOR THE SECOND ANNUAL CAMP FAIR ON NOVEMBER 10!