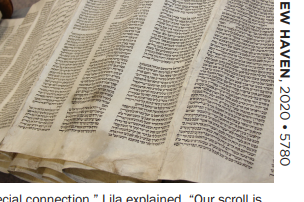 The class examined the scroll, learning that it was Number 1178 and was originally from Horazdovice, which was part of Czechoslovakia before World War II. They learned that the Westminster Synagogue also has a Horazdovice scroll, which prompted learning about life in Horazdovice from the time Jews first settled there in 1618.

“It was just like any other normal town in Europe. Just like in other towns, the amount of Jewish families was limited,” recalled Matt. “Jews were disrespected and not treated like other people until the mid-1800s when they were given more rights.”

“Then they became more successful,” Lila noted. “For example, the Eisner Sewing Company was founded and a wealthy business person purchased a framed Ferris wheel for the community.”

“During the Holocaust, the Nazis came in and took all the scrolls…[they] held on to them, perhaps because they were going to create a museum to an extinct race,” Matt said. Jews from Prague convinced the Nazis to allow them to catalog the scrolls, giving each a number and noting its community of origin.

As part of the Holocaust unit, survivor Andy Sarkany shared his story in a moving visit.

“Everything that Andy shared with us was very impactful,” Beyla wrote. “He had so many messages about helping each other and people who helped him survive...The thing that struck me most was his story about Rose, a non-Jew who took him out of the ghetto to get medical care. He said to love, not hate.”

During the 1960s, the scrolls were brought to Westminster and the Memorial Scrolls Project commenced.

“We found out that the rabbi in charge of the project was the great uncle of one of our members, Melissa Perkal. Melissa came to our class and told us about this special connection,” Lila explained. “Our scroll is written on expensive parchment made from a cow’s hide. It is lighter than other large scrolls…The calligraphy is a combination of both Ashkenazi and Sephardic writing.”

Temple Emanuel is in the process of having the scroll restored to a level of kashrut. The students created presentations about Horazdovice and the Memorial Scrolls Trust for the congregation. They hope to read from it as they become bar and bat mitzvah later this year.