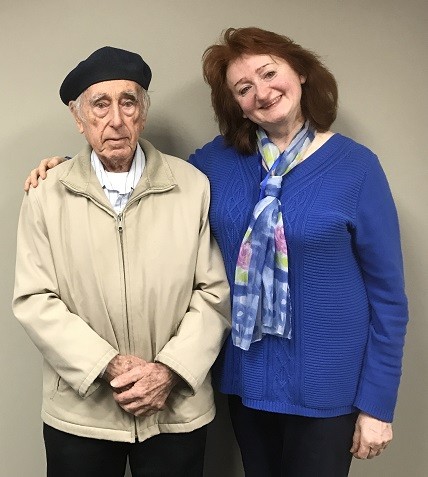 Our community takes its responsibility to preserve the collective memory of the Holocaust seriously. We gathered for our Yom HaShoah Community Observance on April 23, in keeping with the annual commemoration. Survivors in our community were recognized and the victims remembered. Here is the story of one survivor.

In April 1943, Gennadiy Sorochan was sent to a German work camp from his home in Kiev, Ukraine. Gennadiy’s father was Ukrainian and his mother was Jewish. Early in the war, when all of the Jewish people in their neighborhood were given instructions to pack up and move, his father felt that something was wrong, and hid his family to keep them from following the instructions. All of the people who followed the orders were taken away and killed.

Gennadiy’s mother hid in their home for a year, before a neighbor betrayed her to the Nazis. She was shot in January 1942. Gennadiy was 11 years old.

In April 1943, Gennadiy, his father and younger sister were taken to a distribution camp in Berlin and were then transferred to a work camp for the Alkett #2 factory in Berlin, Spandau West. The factory manufactured tanks. The family hid their Jewish origins, but feared death if they were discovered. His father was helped by one of the guards at the factory and they were able to escape.

In hopes of improving their chances for survival, the Sorochan’s returned to the distribution camp in Berlin, where they changed their last name. They were sent to an agricultural site near Cottbus, Germany. After a month there, the family was sent to the camp for the Mechanische Werke factory. Gennadiy’s job was to paint the panels for the military cars assembled at the factory. The family survived at the factory until their liberation in April 1945.
After WWII, Gennadiy came back to Ukraine and attended medical college. Once he had finished school, he moved to the north of Russia, near Siberia, because it was safer for him there as a Jew. He worked there in medicine before moving to the U.S.

Gennadiy now lives in Hamden with his daughter and grandchildren nearby. The family celebrates their Jewish heritage. Some Holocaust survivors don’t want their family to be very Jewish. Understandably, they associate it with being dangerous after their traumatic experiences. They think it is good to assimilate to a new culture and life. For Gennadiy, however, it’s a different story. He wants his grandchildren to remember who they are, and have a strong Jewish identity.