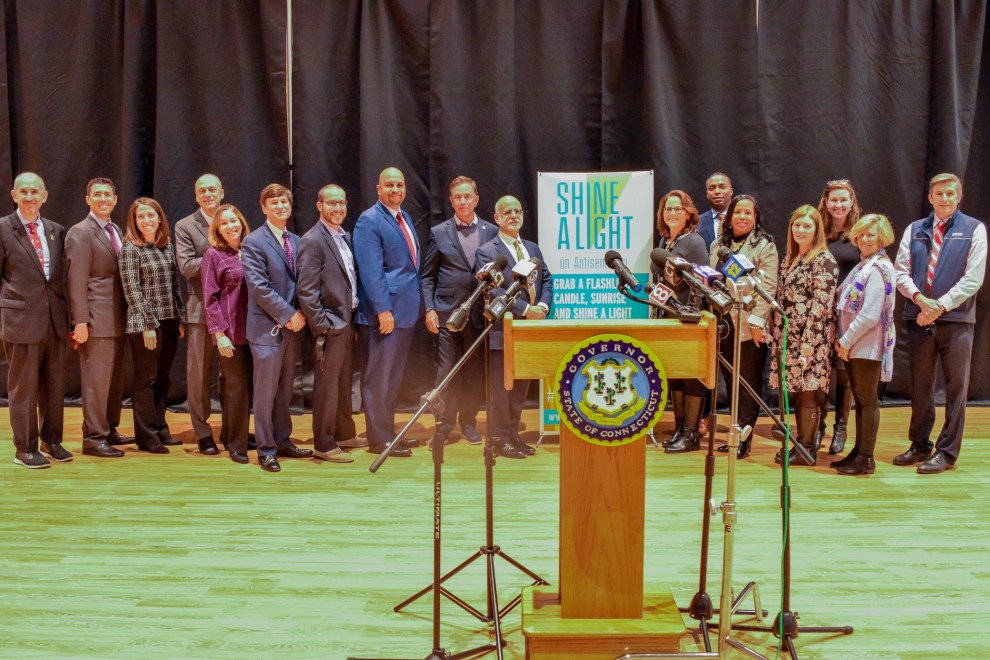 Governor Ned Lamont helped kick off “Shine A Light Week” in Connecticut, at a press conference held Nov. 29 in the JCC of Greater New Haven’s Vine Family Auditorium, and attended by a slew of community leaders—including state senators, leaders of the NAACP and Urban League, as well executives from the seven state’s Jewish Federations, area rabbis, and the interim regional director of Connecticut ADL, and other Jewish community leaders.

Shine A Light Week is part of the “Shine A Light on Antisemitism” campaign—a new North American initia- tive created and coordinated by the Jewish Federation of North American, that aims to address rising antisem- itism in the United States and Canada, and spotlight it through education, partnerships, media and advocacy.

The Jewish Federations of Greater New Haven and Greater Hartford, along with their respective Jewish Community Relations Councils and marketing depart- ment, led a collaborative grant request to receive fund- ing of $45,000 to bring “Shine A Light on Antisemitism” awareness to communities across Connecticut. The effort included a major media ad buy and a broad social media campaign.

The initiative’s kick off on the first day of Chanukah served as a reminder that just one small light has the power to illuminate darkness and spark hope. It was fol- lowed by a week of events hosted by Jewish communi- ties all across throughout the state, culminating on the final day of Chanukah, Dec. 6, with a webinar present- ed by the state’s seven Jewish Federations, their Jewish Community Relations Councils, the Jewish Federation Association of CT (JFACT), and the Connecticut office of the Anti-Defamation League (ADL), in partnership with the NAACP, Urban League, and Office for Catholic Social Justice Ministry of the Archdiocese of Hartford.

After a performance of “Maoz Tsur” by Cantor Julia Cadrain of Temple Israel of Westport, Alperin announced that, while Chanukah may be over, the ShineALightCT.org website will remain up and running to provide resources, links and tips on combatting antisemitic hate.

To shed light on how such hate was born, webinar guest speaker Oren Jacobson, co-founder of Project Shema, which helps Jewish organizations “engage more effectively with progressives on issues surrounding Israel and antisemitism,” discussed the history of antisemitism throughout the world.

“Many people think about antisemitism as starting with the crucifixion of Jesus and ending with the Holocaust. The truth is, anti-Jewish ideas existed before this moment. And unfortunately, they exist long after the Nazis were defeated,” Jacobson said.

Jacobson traced the history of antisemitism from 70 CE, when the Romans drove the Jews out of the Biblical land of Israel; through the 14th century, when Jews were blamed and made scapegoats for the Plague, famine and war; through the 15th century, when Jews were victims of the Spanish Inquisition and burned at the stake; through pogroms and attacks on Jews throughout Europe over the ages; and through the violence and expulsion of Jews from their native Middle Eastern countries.

He then brought the history of antisemitism to recent times, touching on the emergence of the KKK and the American Nazi movement in the early 20th century, and the legalized discrimination against and hatred against Jews that existed in the U.S. well into the middle of the 20th century. He also referenced some of the most recent and infamous incidents of antisemitism and hate including the massacre of Jewish worshippers at the Tree of Life Synagogue in Pittsburgh, the murder of the retired Jewish teacher Sarah Halimini in Paris, and the KKK Rally in Charlottesburg, Va., in 2017, in which White supremacists famously chanted, among other epithets, “Jews will not replace us.”

“Now once again, unfortunately, this type of hate and bigotry is rising once more, as people feel emboldened to let these ideas out from under the rocks, moving more towards the mainstream,” Jacobson told those listening in to the webinar. “And as this happens, unfor- tunately, we see violence targeting Jews once more.”

Webinar guest speaker Ellie Cooper of Middlefield, a recent college graduate and ADL volunteer, shared her family’s story of experiencing antisemitic vandalism at her home during Chanukah when she was a child.

“I remember being really scared and I noticed my moms were scared too. I asked one of my moms before bed that night, ‘Are we in danger? Does someone want to hurt us?” she recalled. “That was the first time that I learned that some people hate Jews. My first lesson about antisemitism.”

Cooper, who describes herself as “a proud Jewish woman of color,” recalled antisemitic comments she heard from other students during high school, which led to her becoming a ADL trainer in adults across the state respond- ing effectively against antisemitism and hate,” Cooper said. “A decade ago the hate was there, just under the surface – snide remarks and insults from young people...That hate is not just simmering anymore, and that brings us to where we are and why we are here today, to shine a light and to awaken our fellow humans to the crimes of antisemitism.”

To learn about more ways in which to help in the battle against antisemitism, visit www.shinealightCT.org