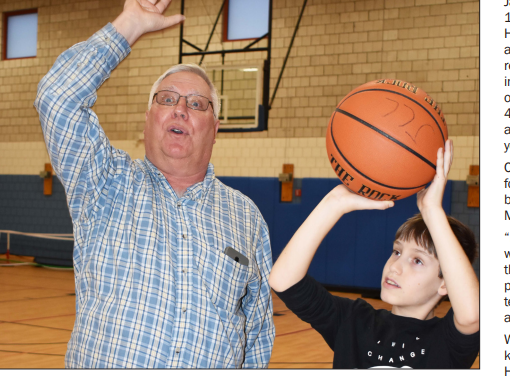 For 45 years, Allan Greenberg has been the JCC of Greater New Haven’s heart and soul, according to his dear friend, Martha Weisbert. This makes Greenberg, who served as the JCC’s Health and Physical Education Director, the perfect choice for Shalom New Haven’s Honorable Menschen award.

Weisbart served as Associate Executive Director of the JCC, and worked on different committees at the JCC and the Jewish Federation of Greater New Haven for over 40 years.

“Allan’s skills as a teacher, coach, counselor and friend have inspired hundreds, and perhaps thousands, of young boys and girls to experience enormous joy, and witness through his words and action, the highest values of integrity, sportsmanship and respect,” said Mark G. Sklarz, a past JCC President. “For over 40 years, Allan has extended himself to every person he meets and does so with ultimate sensitivity, sincerity and goodwill. He is to me the epitome of a mensch and has, in every respect, been the best ambassador our Center could possess.”

Scott Cohen, the JCC’s Executive Director, declared that, “Allan is ‘The Mayor’…he knows everyone and their extended families…for thousands of people he IS the JCC.”

Greenberg’s roots to the center go far deeper than just his time working there. His grandparents owned the first kosher restaurant in New Haven; it was sadly torn down when the highway came through. His grandparents then opened the first restaurant at the JCC when it was on Chapel Street in New Haven. As a child, Greenberg remembered participating in many of the JCC’s programs.

He got his first official job at the JCC as a part-time employee in 1971 when Len Margolis, who was the JCC’s Athletic Director for many years, asked him to run Biddy Basketball. Greenberg then graduated from Southern Connecticut State University in 1973 with a degree in recreation and leisure education with a minor in physical education.

Greenberg first started as a basketball coach at Hopkins Day Prospect School and Hamden High School. He began working full time at the JCC in 1974. He served the JCC’s Health and Physical Education Department as Assistant Director (1975-1976), then Associate Director (1976-1977) and finally Director since 1978. For 10 years, he also served as the Chairman of the New England Jewish Community Center Athletic Director Association.

The JCC honored Greenberg after his 25 years of service with a roast. At the event, he told them that when first hired, he was told he was on probation for six months and that he would get a letter when he was officially hired. “I never got my letter,” Greenberg said. “I still haven’t!”

“What he is most known for is the care he lavished on the kids he came in touch with through basketball,” Weisbert noted. “He headed up Biddy Basketball and made sure that every child played. Good sportsmanship, fair play, being a member of a team and the consideration of others were important to Allan. He was more focused on every kid playing than winning games.”

Bruce Jacobs, Greenberg’s good friend and a former JCC President, agreed. He noted that Greenberg made it clear that everyone on the team had to play and that winning was secondary to participation and enjoyment of the game.

Jacobs has known Greenberg since 1978 when he moved back to New Haven and began playing in the JCC adult basketball leagues. “Allan was responsible for getting me involved in volunteer work by urging me to be on the JCC board, which turned into 4 years as president of the JCC board and other volunteer positions over the years,” he said.

Cohen, who has known Greenberg for 25 years, was just 17 and playing basketball for the Worcester JCC in Massachusetts when they first met.

“Little did I know that 11 years later, we would be colleagues. Allan has one of the strongest moral compasses of any person I have ever met,” Cohen admitted. “His integrity and sense of fair play are unmatched.”

Weisbert revealed that most people know Greenberg has a messy office. However, she said, not everyone would know that he always keeps a shirt and tie in his office in case he has to go to a funeral at the last minute. “Allan represents the core values of the Center—serving people and ensuring the safety and good health of everyone there,” Weisbert said.

Judy Alperin, the Jewish Federation of Greater New Haven’s CEO, met Greenberg when she first came to the community from Pennsylvania four years ago. She felt even at that first meeting that she already knew him.

“There have been a few Allans in my life and I have the fondest memories of them,” Alperin explained. “Just like Allan, they were warm, encouraging, kind and had a twinkle.” She said she is constantly surprised by Greenberg’s favorite foods, his expansive family members and his impressive closet full of plaid shirts.

Alperin said Greenberg’s knowledge and networking skills proved invaluable after the four-alarm fire that severely damaged the JCC in December 2016, less than a year after she first arrived at the JCC.

“For many dealing with the aftermath from the fire and starting from zero, Allan’s institutional memory from our days as a JCC ‘without walls’ kicked in immediately,” Alperin noted. “Since Allan has strong relationships with colleagues across the Greater New Haven area, he quickly mounted our sports programs in multiple locations to reduce the inconvenience and interruption to our members.”

“Since I came on the scene later in Allan’s career, what epitomized him as a mensch to me was the way he respected his father and helped him to have dignity, community and friendship in his later years,” she said. Greenberg’s father, Arthur, died in January 2019 at the age of 96. He too worked at the JCC for many years and was beloved by the community.

“The JCC’s mission is to help people, to improve people,” he said. “I’m just trying to make kids better people, better citizens with values.” Greenberg said he has been blessed to see so many families grow up through his time at the JCC.

Join the JCC for the First Annual Sports Banquet to relive the glory days of our youth and honor Allan Greenberg for all he has done for so many in the athletics department over the years here at the JCC. The banquet will take place in the Vine Family Auditorium on May 3, 2020, at 10:30 a.m. Brunch will be served.

Shalom New Haven seeks to recognize people in our community who give their time and talents to improve our community. Who would you nominate for our Honorable Menschen? Send your suggestions, stories and photos to: nkohl@chapelhaven.org.