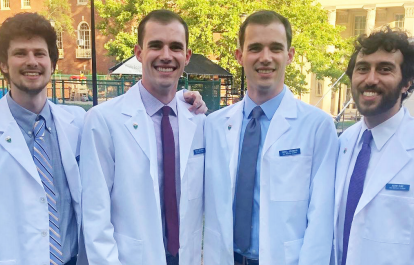 The Ezra Academy had a great showing at the Yale School of Medicine, Class of 2023, White Coat Ceremony this summer. This group of mensches received over 100 heartwarming reactions on the Ezra Facebook page, including Mazal Tov’s and thumbs up. Shalom New Haven staff spoke to Ezra teacher Lois Murray, who said she remembered all of them very fondly.

“Adam King was a great thinker, someone who always had an interesting take on things. He had wonderful sense of humor and would make me laugh quite often. He had an easy-going personality, which came in handy once when I, under the impression that he had been adopted from Guatemala, pointed out the country on a map of Central America, calling it the "land of his birth." ” He assured me that he was his parents biological child, chuckling about the whole thing. He was someone who really was interested in the world around him.
Jonathan Kluger was always such a good student, always dedicated to excellence. I remember working with his brother Mikey one summer, meeting at the Westville Library, at the time that Jonathan was applying to medical schools. Jonathan would drive his little brother to the library, and while we worked, he would do exercises in the test book that prepares students for the MCATs. He was so dedicated that I predicted he would indeed be accepted. I am very happy to see that I was right in my prediction!
Scott and Dan Grubman were terrific kids when they were at Ezra. They were quite lively and charming, boys with big hearts who would stick up for their classmates when they were needed to do so. I remember how sweet they were to their little sister Ali, wonderful big brothers and true mensches.
I believe all four young men will make wonderful doctors some day, and I am proud of all of them."