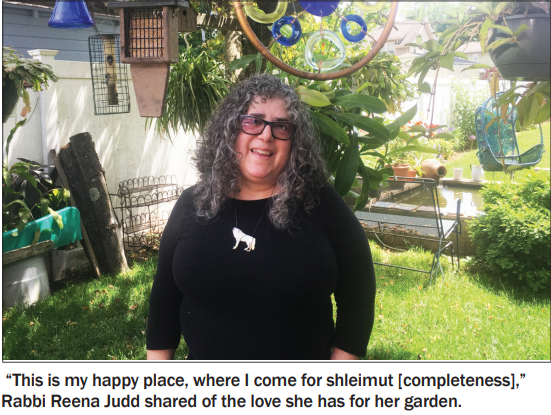 HONORABLE MENSCHEN: Rabbi Reena Judd Shares her Perspective on Being a “Rabbi-ing Rabbi”

Those who have spent more than a couple of minutes in the vibrant presence of Rabbi Reena Judd, the Quinnipiac University campus rabbi, know that her rabbinic role is more of a life mission than a job. “You don’t just leave it at the office,” she said. “It’s who you are and how you live your life and what you do and how you spend your time and the TV you watch and the tzedakah you give.” This declaration illustrates both the personal and professional philosophies of this self-described Jew-loving, left-wing Zionist.

The tranquil backyard of Rabbi Judd’s Hamden home set the scene for an open conversation about her life story, career accomplishments, and personal outlook on Judaism. From a chair beside her pond, she shared, “This is my happy place, where I come for shleimut [completeness].”

With excitement she shared the elaborate flowers she grows and the vegetable patch her husband attends to. “When I find myself searching [for G-d], and I don’t search a lot, I get back to the garden,” she said. Rabbi Judd made it clear that she does not categorize herself as a “G-d kind of rabbi,” as she said, “I never rely back on G-d for answers or reasons,” but it is here, she believes, that the “Creator of all Source” makes His presence most known to her.

Rabbi Judd was raised in Hamden where she grew up attending Temple Beth Sholom, a Conservative synagogue. “Hamden is what America is all about,” she said, labeling it as a neighborhood of “acceptance, tolerance, and community.” It comes as no surprise, then, that following a brief stint in Israel and in other communities in America, Rabbi Judd would eventually find her way back to her hometown, and this time, in a position of leadership.

“There’s a place in the Jewish world for a person like you,” the late Rabbi Jerry Brieger OBM of Temple Emanuel-- with whom Rabbi Judd held a close relationship-- shared with her. Rabbi Brieger’s assertion was transformative for Rabbi Judd, as it gave validity to her unique Jewish outlook. Moreover, it ultimately helped inform her decision to enter the rabbinate.

The pride Rabbi Judd feels from being a female rabbi is also mixed with frustration. “It saddens me because I have to live in the Diaspora to have the kind of rabbinical career; I couldn’t have it in Israel,” she said in reference to the fact that Israel does not recognize rabbinic female ordination. “It’s still a male-dominated field- not even just within the structure of Orthodoxy- when women are still earning only 78 cents to every man’s dollar.”

Over a five-year period, Rabbi Judd held pulpit positions in synagogues in Mississippi and New York state. From her experiences in these communities, Rabbi Judd felt that she was unable to reach the synagogues’ populations, therefore unfulfilling her rabbinic potential. “I could never do the pulpit because adults are calcified,” she said. “Their minds are hard.”

With this in mind, she found her way back to Hamden where she has spent the past 15 years serving as the Quinnipiac University campus rabbi. From this role, she is able to work closely with Jewish college students and play a meaningful part in their on-campus religious experiences.

“I bring Jews in. I’ve grown the community; the Jews that are choosing to come year by year are steadily more observant in their own life,” Rabbi Judd said. About 25 students now attend the weekly Friday night Shabbat service. She explained that while she serves as the religious conduit, the students are the ones to organize the Shabbat menu and to prepare the ritual items such as candles and cups of wine: “They make it happen, they do the hands-on tasks that you need to do to make Shabbat.”

Rabbi Judd understands the weight of her role as the sole Jewish presence on campus and seeks to create an environment where every student can come to breathe in a safe space. “I’m the personification of ‘Jewish’ in your life right now,” she said of how the Quinnipiac students view her position.

Rabbi Judd also acts as a personal mentor and friend to those who seek her wisdom and guidance: “My role is to make sure they know that Judaism cares if they’re happy or sad; they matter in the Jewish experience, even if they don’t know me.”

For the past 25 years, Rabbi Judd has been working on a book of alternative midrashim [biblical expositions], which she entitled White by Default. When asked about the book’s unique name she recounted what for her was a life-altering experience. Back when she was the rabbi in Mississippi she was asked, “How come your people are more white than they are Jewish?” to which Rabbi Judd responded, “You don’t know me and you don’t know that everything I do, I do because I’m Jewish. I’m just white by default.”

There it is, the declaration that all Rabbi Judd seeks to accomplish in her life must be done from a Jewish perspective. “How I perceive my world, how I perceive Torah, how I perceive America changed because of that man and that line,” she said.

Rabbi Judd holds undergraduate degrees in art history and social work, but she is most recently the recipient of an honorary Doctorate degree of Divinity from Hebrew Union College-Jewish Institute of Religion (HUC-JIR). According to the institute’s website, “Distinguished communal and civic leaders and alumni will be awarded honorary degrees and prizes in recognition of their service to Reform congregations and North American Jewry, and in honor of their humanitarian work.”

“To work with youth is to kiss the future,” Rabbi Judd said. “And that’s how I feel every day when I go into work: Who am I going to kiss today? I always want to work with my Jews.”

While Rabbi Judd takes pride in the fact that she does not preach about religion, she does emphasize the importance of every individual’s need to be present within their own lives, as it ultimately enables them to appreciate other human beings’ inherent G-dliness, tzelem elokim.

“Such a big part of being Jewish is being present, bearing witness. Showing up for yourself- with intention and dignity,” she stressed. “Kavod and Kibud[honor/respect] are really important parts of how to be Jewish- you can’t be disrespectful of another person’s humanity. You can’t hold people against themselves.”