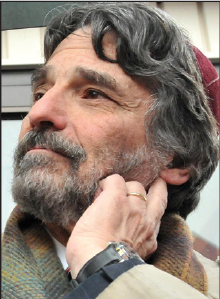 Perhaps it was beshert that Rabbi Herbert Brockman would bring his passion for human rights and social justice to the Board of the Jewish Family Service of Greater New Haven (JFS). Brockman, who will be honored at JFS’ June 17 virtual Spring Celebration, has long been dedicated to Jewish values and to community welfare. He brings to board leadership a natural fit with the JFS mission of providing human and social services to the most vulnerable—without regard to race, ethnicity or religion. JFS Co-President Ilene Rosalimsky Bronen has observed that he inspires the Board to keep Jewish values central to every aspect of its organizational oversight.

“He always captivates the Board when he shares his vision and fresh perspectives on social justice for the New Haven community,” Bronen said. Co-President Linda Caplan pointed out that having Brockman on the Board has enhanced board dynamics as well. “Having Rabbi Brockman as a Board member of JFS has brought an even higher level of unity and sense of purpose to our Board. We are so lucky to have him,” she stated.

Amy Rashba, the agency’s CEO, summed it up: “JFS is proud to honor Rabbi Herb Brockman, whose involvement in both the Jewish and interfaith community epitomizes all that JFS stands for. With warmth, intelligence and a Jewish heart, Rabbi Brockman honors us all with his devotion to tikkun olam. He is a true mensch!”

Brockman has had a long history of social justice activism during his 32-year tenure as rabbi of Congregation Mishkan Israel (CMI) in Hamden. Under his leadership, the synagogue began its participation in Abraham’s Tent, an interfaith program which provides shelter to homeless men; established the Peah garden to grow produce for area soup kitchens; moved to declare itself a “sanctuary congregation” in response to the Trump administration’s immigration restrictions; and became active in the Jewish Community Alliance for Refugee Resettlement. Brockman, who retired in 2018 and is now CMI’s Rabbi Emeritus, was followed by Rabbi Brian Immerman, who continues the long-standing tradition of social action at CMI.

CMI President Michael Dimenstein was quick to see how Brockman’s passion for human rights dovetailed with the work of JFS. “Rabbi Brockman always inspires and challenges us to view the world through the lens of Judaism’s values and ethics,” he observed. “In the way we treat refugees, how we address the crisis of food insecurity, or how we express racial justice and interfaith unity, Rabbi Brockman shares the same guiding principles that are the basis of the JFS mission.”

Rabbi Brockman recently reflected on the circumstances that led to his fortuitous connection to JFS following his retirement from CMI’s pulpit. “I knew that I wanted to continue to support those efforts which I had always considered important, and to which I had dedicated my life professionally and personally. Within the Jewish community, the question was which organization represented best the lived-out values of Judaism? The Jewish Family Service actually ‘feeds the hungry, clothes the naked, cares for the orphan and supports the widow.’ Its mission is of biblical proportions. The clincher for me was when I went in search of food for an immigrant Latino family whose father, the family breadwinner, was being placed in a church  sanctuary to avoid deportation by ICE.

I called JFS late in the day, and although the food pantry was closed, Sandy [Hagan, JFS Food Pantry Director] immediately told me to meet her there. She opened it up and let the family ‘shop.’ When the wife picked up a few items, Sandy insisted, ‘That’s not enough. Fill it up.’ A minister who was accompanying us commented, ‘Your community is amazing.’ I still feel the pride I felt then. It’s why I chose to join the Board of JFS and support their work.”

The June 17 Spring Celebration, JFS’ major annual fundraiser, will be presented virtually this year, and will feature a look at some of the agency’s most impactful programs. Tributes to Rabbi Brockman are expected to be delivered by community leaders, including colleagues among the Jewish and interfaith clergy.
More information can be found at jfsnh.org.