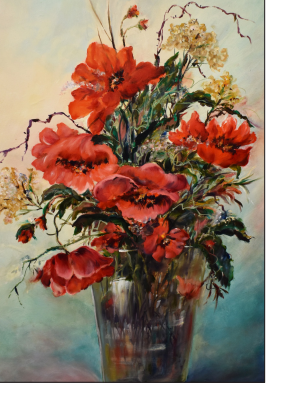 For nearly two years since returning after the 2016 fire, the walls along the main corridor of the Beckerman Lender Community Building have stood empty. That will soon change. The Hoos Family Art Gallery will grace the corridor walls, made possible by a generous donation from Jeffrey and Betsy Hoos in honor of Jeffrey’s mother, Esther Hoos.

Esther Gass Hoos (December 26, 1919-February 25, 2004) grew up on a farm in Orono, Maine, the second to youngest of 11 children. Passionate about education, she obtained her master’s degree, specializing in the literacy of young readers. At a time when few women obtained these credentials, Esther became both a teacher and reading specialist in Maine’s public school system while raising her two children, Robin and Jeffrey. Although she always dabbled in painting, she spent her later years perfecting her technique in both oils and watercolors. Throughout her life, Esther was an avid gardener with a love for planted flowers; they were often the subjects of her paintings. The gallery space celebrates her artistic accomplishments in the year of what would have been her 100th birthday.

The Hoos Family Art Gallery, opening in early 2020, will feature art from all over Connecticut. Interested in having your art featured? Themes and artists will be selected by a gallery committee.