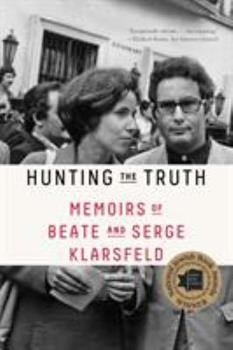 If you’re looking for a great escape from the dark and cold days of winter, your search is over. All you have to do is snuggle up under a comfy blanket, pour yourself a cup of hot something…and bury yourself in a good book. Of course, everyone’s got their own idea of what constitutes a good book. But if you like riveting true stories with larger than life heros, a great book to bury yourself in is “Hunting the Truth: Memoirs of Beate and Serge Klarsfeld.”

A thrilling memoir written in their alternating voices, “Hunting the Truth” tells the story of Beate and Serge Klarsfeld, who met on the Paris Metro, married in 1963 and, for more than half century, have hunted, prosecuted, confronted, and exposed Nazi war criminals all over the world.

They have been sent to prison for their beliefs and have risked their lives protesting antisemitism behind the Iron Curtain, and throughout South America and the Middle East. They have been assaulted and heralded, insulted and exalted, honored by U.S. presidents and sent letter bombs by neo-Nazis.

It is a remarkable story of a loving couple dedicated to the same ideal— combatting evil—despite having been born on opposite sides of the Second World War. The story of a Jewish boy born in Bucharest who, in 1943 at the age of eight, hid with his mother and sister in their home in Nice, France, while his father was taken away by the French Vichy police and sent to Auschwitz where he was subsequently murdered; and a young German girl who grew up in the ruins of a defeated Weimar Germany.

In 1978, Serge Klarsfeld published Memorial of the Deportation of the Jews of France, a book listing the names of more than 80,000 Jews deported from France to concentration camp or killed in France.

In recognition of his work as a Nazi hunter, Serge Klarsfeld is among six finalists nominated for the 2022 Genesis Prize. The annual $1 million-dollar award honors individuals for their professional accomplishments, commitment to Jewish values, and contribution to improving the world.

The New American Acculturation Program offers many educational programs, celebrates Jewish holidays and continued to teach about Jewish life and traditions all around the world.