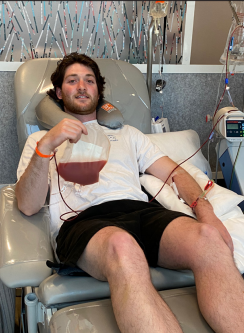 “I didn’t do anything special. Joining is the big part. I was just lucky to be picked.” Pikuach nefesh ( ), loosely translated as saving a life, is an integral principle in Jewish law about the preservation of human life. It is one that has been a theme in one young man’s life as he grew up Jewish in the New Haven area, as he traveled to Israel, as he volunteered to be part of the bone marrow registry and as he donated to save a life. John Sandberg was raised in a family that was built on giving back to the community, both professionally and personally. His mother, Emily Sandberg, worked previously as the executive director of the Jewish Community Alliance of Southern Maine and is now Director of Administration for Wellspring Consulting, which works with nonprofits to develop strategic plans. His father, Ken Sandberg, is the Vice President of Health Services at the Whitney Center, a non-profit senior living community serving the Greater New Haven area.

“With my dad’s job being about giving back and serving, he has shown me what a very compassionate role model looks like as he helps people in the last stages of their lives with dignity. And my mother’s job—and now as the Chair of the newly launched New Haven chapter of Dignity Grows—also exemplifies how both my parents are influencing me to do good for others,” said John.

The tikkun olam (“repair the world”) concept was and is a large part of his Jewish upbringing. As children, John and his siblings were surrounded by talk about giving back and doing the right thing. He volunteered at Woodbridge’s food bank in the sixth grade; his sister Mia volunteered at the Jewish Family Service food bank and his brother Zack was heavily involved in BBYO, Hillel and Congregation B'nai Jacob.

“I have felt a strong connection towards the Jewish community my entire life. I attended Hebrew school in Maine before moving to Woodbridge and joining B’nai Jacob, where I would later have my bar mitzvah. I was fortunate to attend an allboys Jewish overnight camp in Middleboro, MA. Camp Avoda provided me with a great Jewish family, a ‘home away from home.’ Avoda has since begun recruiting at the JCC of Greater New Haven camp fair. I am proud to have a shared bond with members of both communities. Upon moving to Woodbridge, the first place I made new friends was at JCC Biddy Basketball camp. I later would enjoy my time on the JCC Middle School Basketball team under Coach Tietleman. These experiences instilled in me the importance of giving back, community and Israel,” said John.

He explained more about his experiences going to Israel with his Camp Avoda friends through the Birthright program the summer after his freshman year of college and what led him to sign up for the bone marrow donor program while there.

“During one of our information sessions, a Gift of Life representative presented on the importance of the bone marrow registry. The registry matches patients with donors that match a certain DNA criterion. The more people active in the registry, the greater the chance a patient has of finding a match. Gift of Life made it very clear that if you weren’t willing to go through with the donation, it is better to not join the registry at all as it may give false hope if you were to be a match and back out. Given how important of a cause this was, it was a no-brainer for my entire group to join. It was incredibly easy to sign up. It consisted of minimal paperwork and a quick swab to the cheek of my mouth for 30 seconds.”

He didn’t get the call that he was a match for nearly three years after his trip to Israel. In the meantime, he continued with school and volunteering. Knowing that school would be virtual for his senior year, John chose to join Americorps’ National Civilian Community Corps 10-month residential program to do something meaningful with the year. The projects they participated in included an environmental project in Oregon to clear out trees in meadows that would be encroaching on plants that butterflies need. They spent three months in Stockton in California working in a drive-thru food bank. In April, they worked 12-hour days helping out at a vaccination clinic, one of the biggest in Texas. The final two months are being spent in Washington near the Canadian border beautifying a campground and restoring cabins at a special needs camp. John will return as a senior (Class of 2022) to Cornell University majoring in industrial and labor relations.

“Growing up in the Woodbridge/New Haven area, you can become complacent in the lifestyle and path set before us as we move toward college. I wanted to experience something different in the US as I was going through my college years so I took a gap year and chose Americorps, which my parents strongly supported. I highly recommend a gap year of service. Taking a break enables you to appreciate what you do have and to see how others in the US are living.”

John recently got the call that he was a potential match for an adult male with leukemia. As a donor, he needed to get a physical and his blood tested in order to be able to donate. Gift of Life organized all of his appointments to eliminate any stress he might feel leading up to the donation. The process, from swabbing through donation, was a no-stress experience for him. Even the donation itself was not painful at all, just mild discomfort, he stressed.

“By being matched with someone, this meant I would need to do an additional DNA swab to ensure I was the closest match to the patient. When I signed up, I learned there was only a one in 300 chance of being the perfect match, and a 30% chance of being the perfect match after being denoted as a potential match. I was beyond excited at the possibility of donating, but I knew that if I wasn’t the perfect match, someone else would be the better donor for the patient. I found out three weeks later that I was the perfect match. My first thought was how insane it was that I was going to have the chance to save a human life,” John recalled about that moment and his ability to fulfill a mitzvah tied to pikuach nefesh. “This isn’t an opportunity that everyone receives, so I felt very fortunate to donate. Most importantly, I was excited for the patient and his family.”

“Given how easy it is on the donor, I would tell someone who is debating joining the registry to put themselves in the shoes of a patient and his or her family. What the patient is going through is life or death, and the fact that you can potentially save a life for no downsides is a no-brainer,” John implored. “I think it is especially important for young people to join as they most often are called to donate. Lastly, the patient you are matched with is determined by how similar your DNA is with them. This means that young Jewish people would most likely be saving the life of a fellow Jewish person.”

John did stress that if you are hesitant about joining, wait until you are sure. Otherwise, you may get called when you are not ready. If you do get called, and you decide to back out, it could hurt the family. “You have a chance to save someone’s life. Pikuach nefesh…this is your chance to do it,” he emphasized. Watch for more details for our local donor drive to be held at the JCC during the summer. To find out more information about being a possible bone marrow donor or to register, visit giftoflife.org