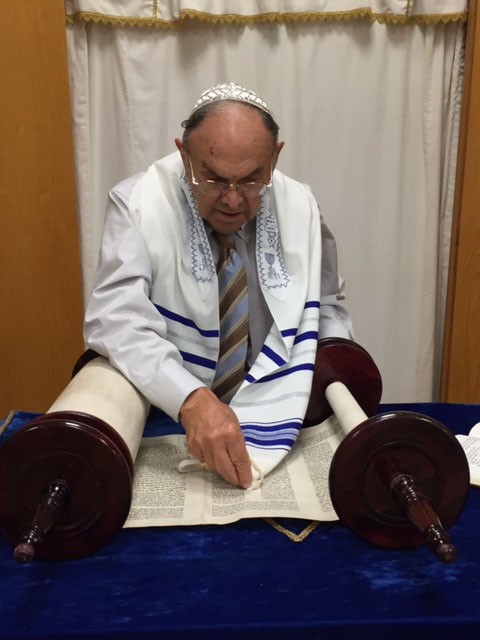 by Cindy Mindell, Special to SNH

NEW HAVEN - Herbert Mermelstein still remembers his first bar mitzvah ceremony, nearly 70 years ago: how he led the entire Saturday morning service with Rabbi Stanford of Ahavas Zedek in Akron, Ohio, and was the center of attention at a fancy reception befitting the youngest of five children and the only son.

His Maftir book and bar mitzvah speech from that May Shabbat in 1938 are among the precious possessions that have accompanied him through a lifetime spent in Akron, then Florida, and most recently, Connecticut. On Saturday, Dec. 17, Mermelstein will dust off his Torah-blessing skills when he joins 14 fellow residents of Tower One/Tower East at a special adult B’nai Mitzvah Service from 10 a.m. to noon at 18 Towers Lane in New Haven. The event is open to the community.

Mermelstein moved to New Haven in August 2015, nine months after burying his wife, Miriam, and three months after celebrating his 90th birthday. Miriam’s death made him a regular at Friday night and Saturday morning services, where he eventually learned the Torah blessings by heart. He attended a monthly class at The Towers taught by Rabbi Benjamin Scolnic of Temple Beth Sholom in Hamden.

Why would people in their later years want to participate in a coming-of-age ceremony traditionally reserved for 12- and 13-year-olds? “Life circumstances sometimes prevented our residents from achieving this rite of passage,” said Interim CEO Jackie Curl. “For those who were not able to participate when they turned 13, this is a second chance. For others who once celebrated their b’nai mitzvah, this is an opportunity to reaffirm their desire to stand up and be counted.”

“One man told me, ‘I’ve never felt fully Jewish; I’ve always felt like a second-class citizen because I know stuff, but I never had a bar mitzvah ceremony,’” Scolnic said. “He actually knows the brachot – it’s not a matter of not knowing – but he never felt like he could have an aliyah, which is not technically true. Of course he could have had an aliyah, but he never felt like he should because he hadn’t had a bar mitzvah ceremony. That in itself is enough for me to find meaning in this event.”