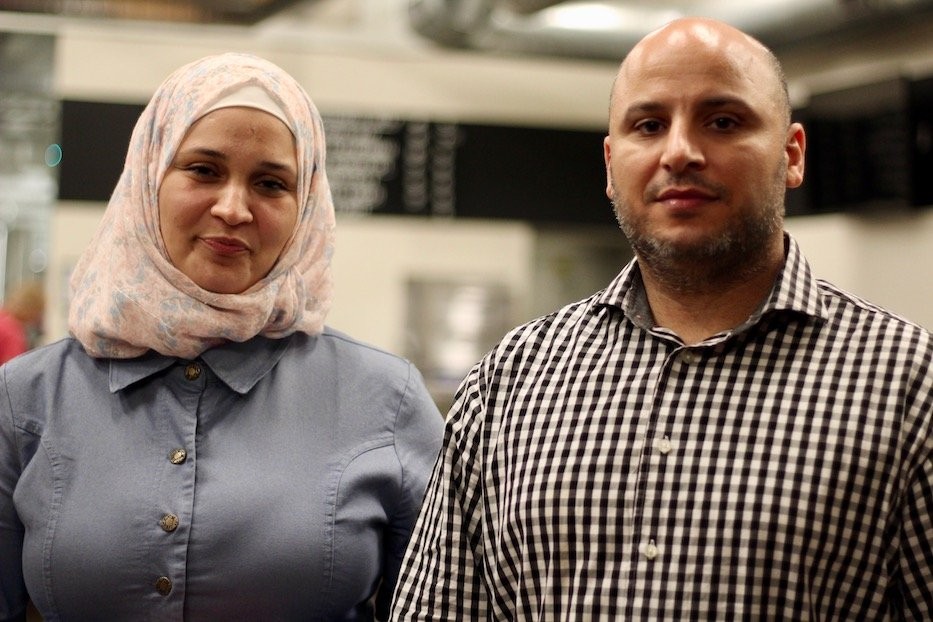 Photo Credit: Lucy Gellman
On September 9, more than 90 people listened to ten storytellers recount their personal experiences about “Living in a Foreign Language.”  The event at East Rock Brewing Company was a fundraiser for JCARR, the Jewish Community Alliance for Refugee Resettlement.
JCARR volunteer Brian Dore was co-organizer and emcee of the event. The theme, he explained, is applicable to a wide range of experiences, not only living in a foreign country. One storyteller, for example, told about learning to communicate with her dog! Others brought laughter and tears as they shared accounts of mixed-ups in translations, assumptions, misunderstandings, sometimes comical, sometimes serious, as students living in homestays abroad, as refugees new to the U.S.,  as employees in another culture, and as members of mixed-culture families.
JCARR English tutor, True Fezer Wolff, spoke about choosing the words that would go on her gravestone, a search involving English, Hebrew and German. Veronika Grimm recalled the kindness of strangers when she emigrated to the U.S. from Hungary in 1952.
Khadija Alahmad of JCARR’s “Family 3” spoke about her family’s experience leaving Syria, first for Turkey and three years later to the U.S. The family boarded a plane in Turkey the night in January 2017 when U.S. President Donald Trump was instituting a travel ban on immigrants and refugees from seven majority-Muslim countries. JCARR volunteers waited on this end, not knowing whether or not they would arrive in New Haven that night. Fortunately, they did, but the hard work of adjusting to their new life in our community was just beginning.
Difficulties include getting a job and adjusting to the expectations of the work world here, fitting in at school and parents negotiating three different schools in one family, giving birth to a new child, and starting her own business.  Khadija has shown tremendous resiliency, confronting each new challenge with determination and excellent English language proficiency. She is grateful to JCARR volunteers for their help.
Khadija says,  “immigration is a bittersweet experience. It is harsh and difficult, but honestly, it has taught me many things I wouldn’t have learned if I was still in my country. Immigration is not an end, but the beginning of success when you finally find the courage in yourself.”