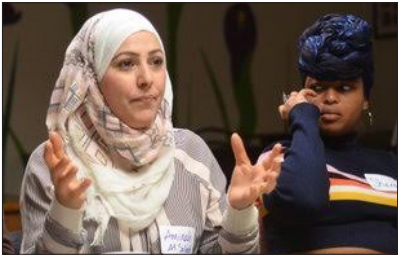 This Mother’s Day, the Jewish Community Alliance for Refugee Resettlement (JCARR) applauds the mothers of its refugee families who, like many mothers in the US during COVID-19, braved financial hardships while working, caring for their families and overseeing their children’s schooling. One mother faced these challenges while pregnant. Aminah's new baby was born last October. His birth meant Aminah could take a few weeks unpaid maternity leave to spend with the newborn, his three older siblings and her husband. She had worked through her pregnancy, exhausted, but with the enthusiasm she is known for. Aminah wouldn’t dream of not returning to work. Her success was too hard won.

Soon after Aminah's family had settled in Connecticut in 2016, her husband landed a job. JCARR friends explained that in the US, both parents usually work. At first, Aminah refused. In Syria, a middle-class wife like her does not work outside the home. She certainly does not work with men. Her hijab and modest dress easily identify her as a Muslim, and hate crimes against Muslims were increasing.

But, to be self-sufficient, the family needed more income. Aminah was an accomplished home cook and members of JCARR’s employment task force persuaded her to enroll in a commercial cooking and entrepreneurship training program with Cityseed/ Sanctuary Kitchen. The program checked a couple of crucial boxes. Cooking is an acceptable job for a woman from Aminah’s culture and Sanctuary Kitchen has a female staff. “Aminah had to work against her cultural expectations,” recalled Kate Ezra, who works on the task force. “But then her charismatic personality, skills and energy transported her.” Today, Aminah is a manager for Sanctuary Kitchen.