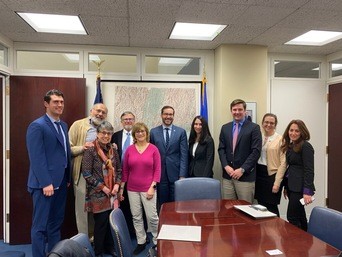 In the opening Levering Community Relations to Fight Anti-Semitism panel, Dr. Deborah Lipstadt and others discussed their first-hand experiences and shared strategies to bolster community relation efforts. During the conference, advocates and experts spoke about gun violence prevention, climate change, religious liberty and anti-discrimination protections, ending detention and deportation, and many other topics.

One takeaway the Levys found important was Rep. Brenda Lawrence’s (D-MI) effort as the founder of the new bipartisan Congressional Caucus on Black-Jewish Relations to bring together politicians from both communities and sides of the aisle to advocate for joint concerns. A local example is JCRC’s Jewish Coalition for Literacy, which brings volunteers to work with children in six New Haven public schools, said Betty Levy.

Another notable takeaway was provided by Dr. Tal Becker, an Israeli legal expert and former peace negotiator who spoke on Israel and peace during a time of polarization. “It is difficult to bring people together but Dr. Becker challenged us to remember that we all love our countries, both Israel and the United States; while we may not agree with the prime minister or the president, we will still love the country,” the Levys noted. “Criticism is not productive, but discussion of ways in which a government can be made better, can be productive.”

The Levys and Shifman Berman also lobbied congressional leaders while in Washington, D.C. Along with JFACT Executive Director Michael Bloom and other Connecticut colleagues, they spoke with Senators Blumenthal (D-CT) and Murphy (D-CT) about increased funding for the Nonprofit Security Grant program, additional FBI office resources in New Haven, and the Never Again Education Act.

On April 1 at 8:30 a.m., the JCRC of Greater New Haven invites you to join the annual legislative breakfast in Hartford. Legislative priorities and issues of importance for the Jewish community will be discussed with local elected officials. RSVP at https://jewishnewhaven.org/events/rsvp.