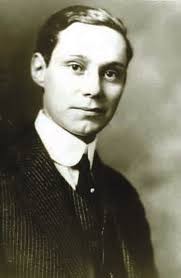 The Jewish Historical Soecity spotlights a young Jewish figure who made a difference in New Haven politics and in the local Jewish community during the early 1900s.

Samuel Campner was New Haven’s first and, so far, only Jewish mayor. He was also the youngest New Haven mayor as well as the mayor with the shortest term of office. He was born in 1887 in Courland, Russia. His parents brought him to New Haven when he was an infant. Besides working with his father as a painter and paperhanger, Campner worked as a newsboy, a hotel clerk and a surface car conductor.

After graduating from New Haven High School and Yale Law School, he worked for several older lawyers before opening his own law office. He was respected as one of the leading trial lawyers in New Haven.

Early in his career, like many Jews of his generation, Campner joined the Republican Party and, for a time, was president of the Young Men’s Republican Club. In 1911, he was elected to the Board of Aldermen. After two terms in office, he was elected President of the Board of Alderman. In January 1917, Mayor Frank L. Price died in office and Campner became acting mayor. The state legislature passed a special law to allow Campner, who was only 29, to become mayor. Later in 1917, he ran in the election for a full term of his own, but a Democrat, David Fitzgerald, defeated him.

In his short time in office, Campner’s major achievement was to make the police and fire departments accountable to elected officials rather than to a commissioner appointed by the mayor.

After losing the mayoral election, Campner was president of a real estate company and then a bank. He was deeply involved in Jewish affairs and in the Jewish community. Like most of New Haven’s Jewish elite in the early 20th century, Campner was an active member of Congregation Mishkan Israel. He was president of Horeb Lodge of B’nai B’rith as well as a mentor, advisor and confident to Jewish students at Yale. For many years, the Campner home was open every Sunday evening to Jewish students at Yale University for fellowship and discussion.

From “Samuel Campner, First and Only Jewish Mayor of New Haven” by Sadie Platcow Ratner in Jews in New Haven Volume II, edited by Barry Herman.