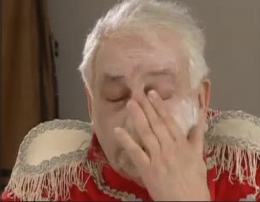 Imagine you are on your first trip to Israel. It’s late winter 1997 and your tour group has just been to the walls of Jericho and is now stopped for a break at a large gift shop-restaurant near that site. The Palestinian flag wafting overhead as you leave your bus and enter the building is somewhat discomforting. At the end of the corridor, you see a big man whose stern expression, handlebar moustache and attire would have been at home in an Aladdin movie.

He’s moving quickly toward you. Then he stops, looks at your tour leader. Suddenly his arms open, his face slides into a great grin and he shouts, “Papa Joey.” It was an event repeated in many places we visited. Joey had told us he knew everyone is Israel and the exaggeration wasn’t that great. Papa Joey, of course, was Joey Russell, the longtime fixture in show business and Greater New Haven.

We would not have been on that trip had he not recruited us at synagogue. “You have to go to Israel,” he told us. “We are paying tuition for three children and can’t afford it,” we pleaded.

“Group leaders get a free pass on their tour,” he told us. “I want you to have this trip so I’ll use that to get the cost down. And I can make it a business trip by bringing back items.” He and his wife Josi ran Costume Bazaar, a costume shop, for many years. We had bonded so I felt comfortable asking him why he was doing this. He explained he was keeping a promise he made to Israel’s first prime minister, David Ben-Gurion.

He told us that he had wanted to become involved in the new fledgling state and had asked the leader what was needed. Should he move to Israel? “No. There are enough shtick-machers (comedians) in Israel. Stay in the States, instead, and work for Israel,” he said Ben-Gurion had told him. And he did for the rest of his life. Our trip was number 38 for Joey, he said. He would lead several more. We, and dozens of people before and after us, caught the fever that Joey spread.

Then there was the Penny Parade. Joey was heavily involved with the local chapter of American Red Magen David for Israel (ARMDI). —now American Friends of Magen David Adom (AFMDA). He was speaking about Israel at a local school one day when he happened to mention Israel needed to replace ambulances which cost $60,000 each. One student did the math and observed that $60,000 was six million pennies. The Penny Parade was born. Joey was involved in collecting the six million pennies and the first of many ambulances was shipped to Israel from the New Haven area. Did he keep his promise to Ben Gurion? You bet.

Leonard J. Honeyman has been a news reporter and editor for more than 50 years and has lived in Greater New Haven for most of that time. The Jewish Historical Society of Greater New Haven is dedicated to collecting and preserving historical documents, photographs and memorabilia of the Jewish community of Greater New Haven. Visit jewishhistorynh.org to digitally read more about many others who have helped shape local, regional and national history.