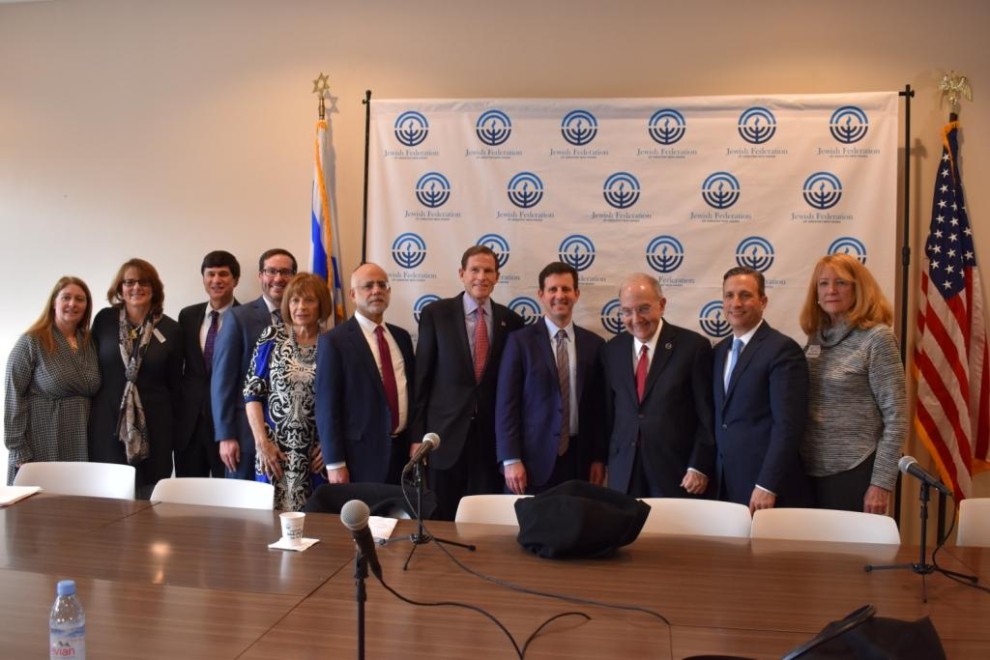 On Thursday, January 2, Connecticut community religious leaders, Jewish agencies and legislators came together at the Jewish Community Center of Greater New Haven to address and condemn recent anti-Semitic incidents and attacks as well as open a discussion on where we go from here. There were at least 30 incidents in Connecticut in 2019, according to the Anti-Defamation League. Joined by state senators, representatives, rabbis, and presidents and executives from Jewish Federations around the state, the hour-long discussion in Woodbridge focused on enforcement efforts and resources, security measures, and what is necessary at a federal and state level.

That money comes highly needed; synagogues and federations across the state have spent money they don’t have on necessary security measures in recent years. “We have an amazing man standing outside making sure we’re all safe, but it took money from our budget that wasn’t there,” said Judy Alperin, CEO of the Jewish Federation of Greater New Haven.

Pauline Zimmerman, president of the Jewish Federation of Western Connecticut, explained how location plays a distinctive role in determining security funding. “Connecticut is diverse in its demographics, topography and geography. Some federations and synagogues are urban, some are not. For those of us who are rural, our needs will be different.”

In areas like New London, smaller congregations may not qualify for federal and state grants. “These rural areas can also be hotbeds for white nationalism and anti-Semitism,” said Marc Ekstrand, the rabbi of Temple Emanu El of Waterford. “There should be some kind of retroactive programming.”

When you take away the money talk and the legal jargon not everyone understands, what are we to do? Do we rationalize this? Do we accept this as our new standard, asked Michael Farbman, the rabbi at Temple Emanuel of Greater New Haven in Orange and the chair of the New Haven Board of Rabbis and Cantors. “Don’t say this is normal because this is not normal. It is, however, our reality at the moment,” he said.

As for the community moving forward, Dr. Jeffrey Hoos, president of the Jewish Federation of Greater New Haven, believes we need to look at what we can do and where we are now. “Imagine we’re in 1935 or 1936 in Germany. We would never be able to have such a meeting, such a conversation. I feel privileged, grateful and lucky to discuss these things. We need to stand together. But that isn’t enough. We need action. We need to condemn hatred when we come face to face with it.”

Additional news coverage of the event can be found through the following media outlets: