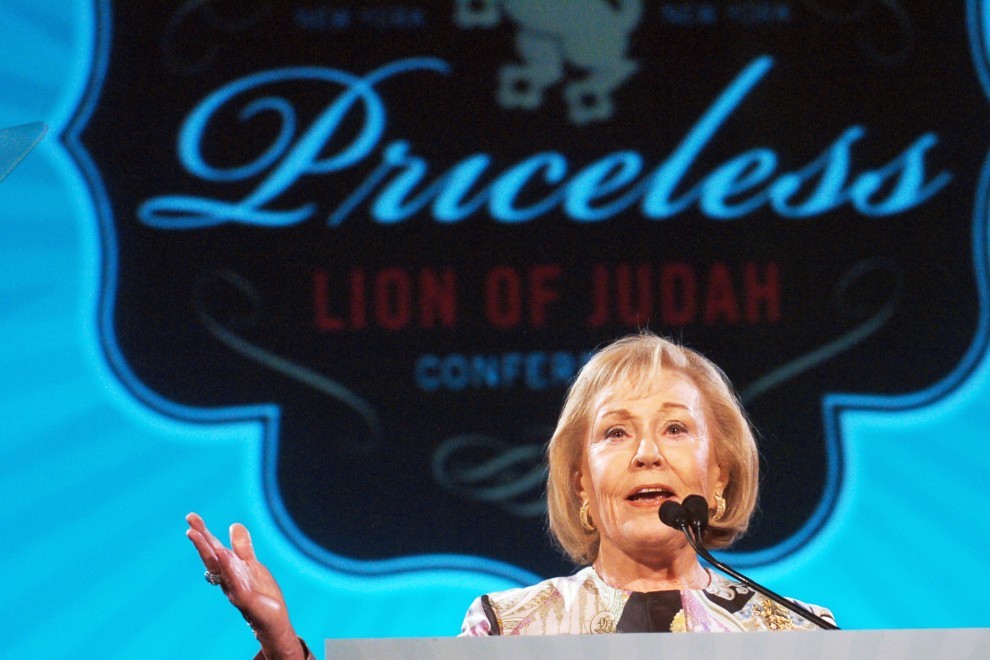 In 1970, when JFNA’s Jewish Women’s Philanthropy was still referred to as the 'Women’s Division,’ wrote JFNA Board chair Mark Wilf and JFNA National Women's Philanthropy chair Carolyn Gitlin, a Connecticut resident, in a letter to JFNA supporters, Kipnis-Wilson “envisioned a path for elevating women’s significant leadership in the field of Jewish philanthropy.

“She believed in the enormous contribution that Jewish women were capable of making and of a minimum million-dollar campaign. This was groundbreaking philanthropy, unheard of for women at that time,” they noted.

Barbara Green Orell, who will receive JFNA’s Kipnis-Wilson Friedland Lion of Judah Award at the Lion of Judah Conference in Phoenix next December, agreed, calling KipnisWIlson “a woman of valor and a woman of great vision.”

“She led by example and inspired generations of women around the world to come together to make a positive impact on Jewish life by helping the most vulnerable amongst us and promoting social justice all over the globe. What a loss and what a life well lived. May her memory be a blessing,” said Green.

The Lion of Judah program co-founded by Kipnis-Wilson and her close friend Toby Friedland z”l, will mark its 50th anniversary in 2022. To date, more than a billion dollars has been raised through the program to benefit Jews in need in local communities, in Israel, and worldwide.

"Norma was an inspiration to each of us,” said Betsy Hoos, a past recipient of the Kipnis-Wilson Friesland Lion of Judah Award. “She and Toby created a symbol of philanthropy that took off from its creation in Miami. The Lion of Judah became an international symbol of Women’s Philanthropy that immediately connected those who recognized it on other women. As Rabbi Irwin Kyla said at an early Lion conference, it was the greatest sorority for giving!”

“The Jewish world has lost a legend,” said Teplitzky. “Norma Kipnis Wilson and Toby Freidland were pioneers for all women and have left a strong legacy of philanthropists. It is an honor and privilege to be a recipient of the Kipnis Wilson Friedland award and follow in their footsteps."

Said Skolnick, “What a great lady and a great legacy for all women! We were so lucky to have her with us at the last Lion Conference.”

Born in Brooklyn, New York in 1928, Kipnis-Wilson’s family moved to Jacksonville, Florida when she was a child. She attended the University of Miami, later marrying Jerry Kipnis and settling n Jacksonville where they raised five children. They relocated to South Florida in 1960. After her divorce from her first husband, she married Allan Wilson and became an active leader in the Jewish community of Miami. In 1972, Kipnis-Wilson and Friedland co-founded the Lion of Judah program at the Greater Miami Jewish Federation, creating a new avenue for women to make significant financial and personal commitments to effectuate positive change.

Since then, the Lion of Judah community has grown to represent a cohort of nearly 18,000 women philanthropists worldwide. Through Lion of Judah, Jewish women from around the world, and from 146 Federations, can celebrate their collective ability to repair the world and secure the future of the Jewish community.

In recognition of their contribution to the world of women’s philanthropy, the Kipnis-Wilson Friedland Lion of Judah Award was est. in 2004. It is presented annually to Jewish women philanthropists in communities all across North America. “Norma remained on the frontlines from the Lion of Judah’s inception until her death,” noted Gitlin. “She inspired two generations of Lions, many of whom are now leading and inspiring yet another generation of Jewish women. She will be sorely missed, but her legacy will continue forever. May her memory be a blessing.”

Norma Kipnis-Wilson is survived by four children, five grandchildren and one great-grandchild. She was predeceased by her husband, Allan Wilson, and a son, David.