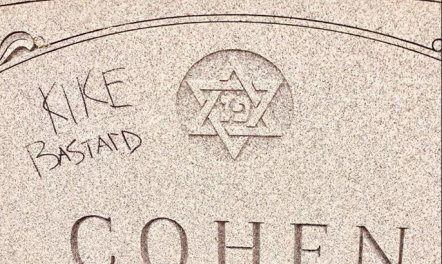 Fifty-niine graves at a Jewish cemetery in Massachusetts were desecrated with anti-Semitic messages such as “Hitler was right,” and “Expel the Jews.” Amir Cohen, the CEO of the New Bedford Jewish Federation, a regional partner of the Jewish Federation of Greater New Haven, shares “It’s hard to imagine that in 2019 in America something like this would happen. This horrific event really shook our community.”

After witnessing the pushed-over headstones and anti-Semitic slurs written in black marker at the Hebrew Cemetery in Fall River, police have opened a hate crime investigation.

The Anti-Defamation League of New England issued a statement, saying, “The desecration of The Hebrew Cemetery of Fall River is an inexcusable act of antisemitic hatred in the place where we honor and remember the lives of our community members.”

Condemnations from law-makers were not late to arrive. Rep. Joe Kennedy III (D-Mass) tweeted “None of this is harmless. Beyond the hurt for the Fall River families whose loved one’s tombstone was defaced, anti-Semitism in any form breeds violence in our communities. We stand united in rejecting these acts of anti-Semitism and hatred.”Sen. Elizabeth Warren (D-Mass) posted on Twitter “Anti-Semitism has no place in Massachusetts or anywhere else in this country.”

As reported in the Fall River Herald News, Louis Gitlan, who has relatives buried at the cemetery, said many of those buried at the Fall River cemetery faced persecution during their lives. “What did they go through to get to this place, and finally be free? Then realize that they can’t escape it.” “this is just the worst possible language... it’s hard to imagine that in 2019 in America something like this would happen.”