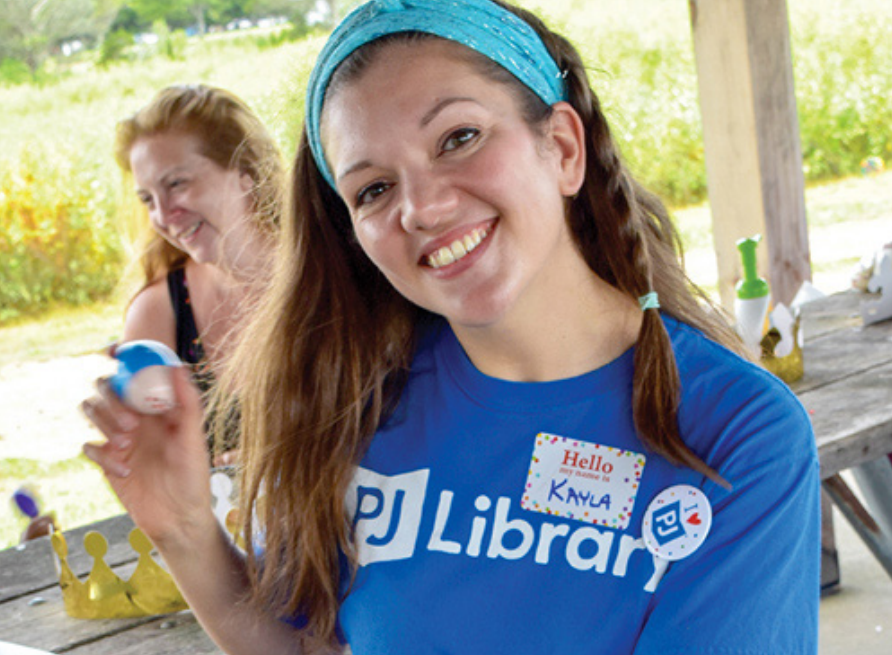 PJ Library doesn't happen on its own. It takes a village and, in our community, that village is made up of several talented professionals, like Kayla Bisbee. Kayla is the Jewish Federation of Greater New Haven’s PJ Library program professional, tasked with connecting PJ Library parents to each other. Here, Kayla talks about how she helps make the PJ Library magic happen.

If you had told me that I would be Jewish, married, and raising a daughter in the Jewish community of New Haven, Connecticut, by my 30s, I would have thought you had lost your mind. And yet, here I am, and I could not be happier.
I grew up as a Southern Baptist kid in Texas. When I met my husband at a Christian college, we quickly wed and planned to devote our lives to Bible translation and church planting in Papua New Guinea. As he studied Greek and we both studied Hebrew, we started to ask a lot of hard questions. I still remember sitting in a bamboo hut in the rain forest as we discussed what it meant to no longer believe in what we were doing and what it would look like if we abandoned a belief system that we held on to so tightly. Ultimately, we left our mission organization and determined that further education would be the next step. My husband was accepted into a university in Dallas.

One day, a visiting Orthodox rabbi was available for Q&A at the university. My husband mentioned he was Jewish by birth but was not raised in the religion. They began regularly meeting over Skype, and through these meetings my husband discovered he had many relatives in the Orthodox community, primarily in New Jersey and Israel. We also
got connected with the local Orthodox community. I'll never forget sitting at the rabbi's table for Shabbat, watching him bless his children and experiencing the warmth and love. I immediately felt at home with Judaism.

Fast-forward through many Shabbats and many questions asked. My husband was accepted to a master's program in religious studies at Yale University, and we were off to Connecticut. Our rabbi from Dallas helped us get connected, and once I had my sponsoring rabbi, I began the process of an Orthodox conversion to Judaism. After spending a month in Israel, we finally had our Jewish wedding on the week of our 10th anniversary.

That same month, I began working for the Jewish Federation of Greater New Haven. It wasn't long before we welcomed our daughter, Naomi Hadassah. PJ Library immediately became a wealth of information and connection for me in my new journey of raising a Jewish daughter.

I soon transitioned into the role of family outreach coordinator and officially became a PJ Library program professional. Nothing could offer more job satisfaction than having the platform to connect with other families with diverse stories
and backgrounds. I have enjoyed playing matchmaker for new parents looking for connection in their community.
More than anything, I am grateful for the gift of Jewish children's books from PJ Library and the gift of inclusivity and welcoming, low-barrier Jewish education that always has a bit of surprise and delight along the way.

This story appeared in the July 2022 issue of PROOF, a PJ Library magazine.