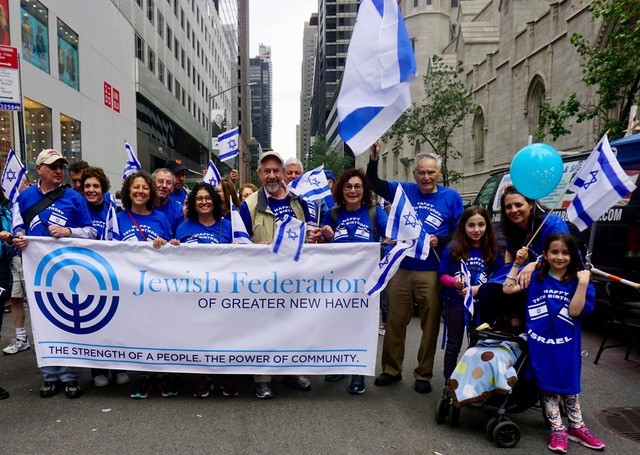 They paraded through a sea of blue and white, led by New York City Mayor Bill de Blasio, and Dr. Ruth Westheimer. Every conceivable Jewish organization from A to Z – the Anti-Defamation League to the Zionist Organization of America - was represented. The marchers included scores of synagogues and day schools, Israeli Boy & Girl Scouts, “Mitzvah (medical) Clowns,” the Shomrim Society of Jewish police officers, a Jewish “LGBT Cluster,” Jewish-American War Veterans, and a swarm of putt-putting “Chai Riders.” All made their way up Fifth Avenue on a wave of Jewish pride, as Israeli singers performed atop floats, bands blared out Jewish tunes and thousands waved Israeli flags, cheered and even cried.

And we, members of the Greater New Haven Jewish community marched too, as we’ve done for over a decade now. (see photo)

This year’s annual Celebrate Israel Parade, held on June 3, was by all accounts the largest and most spirited ever seen in New York City. And it’s no wonder: The theme of the parade was the 70th birthday of the Jewish state!

The leadership of Rabbi Alvin Wainhaus, of Congregation Or Shalom, and Jewish Federation of Greater New Haven Board member Deb Gaudette led to a strong showing from New Haven. Wainhaus, who has spearheaded New Haven Jewry’s participation at the parade for more than a decade, explained his passion for the event: “As members of American society, we live in a time of increasing divisiveness and partisanship. But this annual event allows us to celebrate a feeling seldom experienced these days: the feeling of unity – specifically, Jewish unity. Growing up in my Yiddish-speaking neighborhood, I’d often hear the aphorism: “Vos mir zaynen, zaynen mir, ober Yiden bleiben mir” or “What we are, we are, but beneath our differences, we’re all Jewish.” Well, the Israel parade brings us together every year to celebrate that wonderful and important message: Whether we’re Sephardic or Ashkenazic, religiously observant or non-observant, Republican Jews or Democrat Jews, we are one people! Indeed, I’ve always believed that our purpose, since the birth of our faith, was to broadcast G-d’s dream of global unity. But unity begins at home; and that’s why I love the Israel parade!”