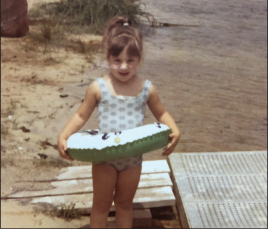 In this photo, I am standing at the dock of Camp Hilltop in Medford, NJ (circa 1972), which would grow to become JCC Camps at Medford, the largest Jewish day camp in the country. Many of my best childhood memories took place at JCC camp.

My earliest memory is of Shabbat: sitting on the floor of the pavilion, the cool concrete under me, wearing blue shorts and a crisp white camp t-shirt as a local rabbi led us in prayers and song. I remember the candles flickering with the dense trees behind them. I remember the sweet smell of the fresh challah slice as it was handed to each of us. I felt warm and special and part of something bigger than my 3-year-old self.

I was always a day camper. I spent two half summers at the New Jersey Y overnight Camps in Milford, PA, but tripping over a tree root and 8 stitches on my forehead ended that foray. I loved camp and as a teenager I continued summers there as a counselor, lifeguard and ultimately a pool director. When my friends kidnapped and blindfolded me for my surprise bachelorette party, I still knew I was at camp, with that unmistakable scent of the New Jersey pine barrens and the soft sandy soil under my feet. There is no question that camp played a huge roll in determining my Jewish future and in developing my leadership abilities. I will be forever grateful.

Every year, the Jewish Federation makes Jewish summer camp possible for over 1,000 children in our community. Camp Laurelwood, Camp Gan Israel, and JCC Day Camps are all supported through contributions to the Annual Campaign. Summer Jewish camping experience is an investment that reaches far and beyond summer fun; campers are sowing the seeds for a lifetime of meaningful connection to Judaism. According to the Foundation for Jewish Camp, by the time campers reach adulthood, Jewish campers are:

21% more likely to feel that being Jewish is important.

26% more likely to be members of a synagogue.

Seven out of 10 young Jewish leaders in their 20s and 30s attended a Jewish summer camp.

Because of the importance of Jewish camping to the future of our community, the Jewish Foundation of Greater New Haven offers incentive grants to first-time campers and needs-based scholarships to families in our community attending Jewish overnight camp.

In Greater New Haven, campers will experience Israel through the eyes of Israeli counselors who enrich our programs for during two weeks in July.

Israeli Emissaries in Training (EITs) will join Camp Laurelwood and JCC Day Camps as a capstone to their year long leadership training program, provided through the Jewish Agency for Israel and our Southern New England Consortium (SNEC) partnership with the Afula-Gilboa region (also known as Partnership2Gether). Emissaries with the highest leadership potential are then selected to spend a full year in a Southern New England community. This is the third summer of this program designed to develop more candidates from Afula/Gilboa.

By end of summer, we will welcome our new young emissaries, Li-on Avraham (female) and Tal Azizi (male). Li-on, from a moshav in the Gilboa, is a graduate of this special program and served as an EIT in New Haven. We are excited to welcome her back and look forward to Tal, from Rishon Letzion, becoming part of our community.

Israeli emissaries (shlichim) have enhanced our community for 19 years, and during that time more than 60 families have opened their hearts and homes to them. Many have made life-long connections. It is not unusual to hear stories of New Haven families traveling to Israel for weddings and other celebrations, as well as return visits from past emissaries. In fact, Nir, a prior emissary, will accompany this summer’s EITs as a chaperone.

If your family would like to learn more about hosting an Israeli emissary, contact coordinator Amalya Brownstein, amalyab@jccnh.org.

The Jewish Federation’s Annual Campaign is the economic engine that enables our Jewish community to thrive. Our mission is vast. Our work is seen and unseen. The people we touch live in Greater New Haven, in Israel and around the world. Jewish camps and programs like the Israeli emissaries are powered by your support of the Annual Campaign. July 31 marks the end of this year’s campaign effort. If you have pledged your support, thank you! If you plan to do so prior to the close of the campaign, thank you, too! Every individual counts and every gift matters.