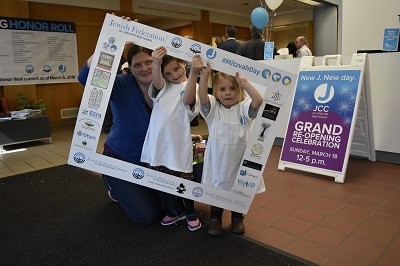 The event was combined with the JCC’s Second Annual Mitzvah Day (a mitzvah is an act of kindness), a Mitzvah Fair, and the renaming and dedication of the Beverly Levy Early Learning Center. Formerly known as Yeladim, the early learning center was named in memory of Beverly Levy, a longtime leader in the Jewish community who died at the young age of 63 in 2014. Beverly’s husband, Dr. John Levy, daughter, Perri, and her mother, Ann Eden, attended the dedication.

The day’s events marked the facility’s official “coming home” just a little more than a year after a devastating fire broke out in a basement sauna at the JCC. The fire, which was ruled accidental, caused more than $2.4 million in damage to the 106,000-square-foot building. Throughout the past year, the JCC continued its operations by relocating the fitness center, early learning center, all activities and corporate offices to other area facilities.

At the grand re-opening, JCC mascot Benny the Bagel danced and offered high-fives to visitors as they entered the main hallway, which was festooned with an arch of white and blue balloons. Visitors toured the renovated facility with its new fitness center and locker rooms, Rothberg Climbing Wall, MakerSpace, Hoos Family Art Gallery, Café 360 coffee shop and food marketplace and, the co-working business center. The revitalized facility also boasts new fitness programs, updated equipment and furnishings, and expanded cultural classes and activities.

A group of 25 volunteers raised more than $87,000 with a Mitzvah Day two-hour phone-a-thon in support of the Jewish Federation of Greater New Haven’s Annual Campaign.

“The JCC is far more than a building – it’s a community,” one member wrote poignantly to the staff after the fire. And on March 18, that community was reunited and strengthened as its members returned home again to the JCC.