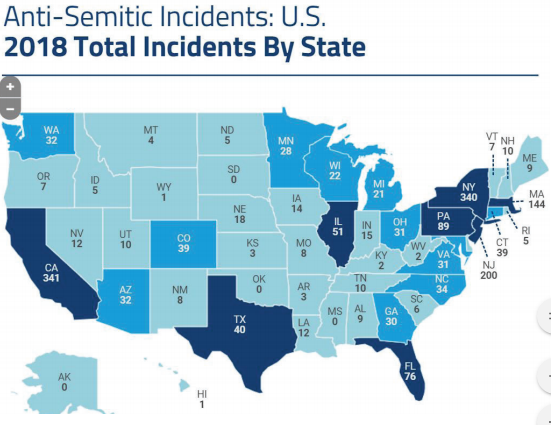 The number of reported anti-Semitic incidents in Connecticut declined slightly in 2018 but remained near-historic levels according to new data released in late April by the ADL (Anti-Defamation League). There were 39 incidents of anti-Jewish harassment, vandalism and assault reported in 2018.

The number of anti-Semitic incidents reported in Connecticut reached a peak in 2017, with 49 incidents, and 38 in 2016. This is the highest it has been in 12 years.
“While the number of incidents reported to our offices declined slightly in 2018, the level of reported anti-Semitic incidents over the last three years is the highest we have seen in over a decade,” said ADL Connecticut Regional Director, Steve Ginsburg. “Here in Connecticut, we are redoubling our efforts to educate students, communities, law enforcement and leaders on this pernicious age-old hatred.”
THE 2018 ADL AUDIT IDENTIFIED:
▪ 19 cases of harassment and threats in Connecticut
▪ 19 cases of vandalism in Connecticut
▪ 1 assault in Connecticut
WORKING TOGETHER TO INCREASE SECURITY
Following the October 27th attack on the Jewish community in Pittsburgh, the ADL and Jewish Federations of North America’s Secure Community Network (SCN) came together to address hate, anti-Semitism and threats as well as violence targeted at the Jewish community in the United States.
Building from the experience and expertise developed within the Jewish community, and inclusive of other faith-based communities, the task force which includes representatives from local, state and federal law enforcement will make recommendations to more effectively address hate crimes while enhancing safety and security for all faith-based institutions.
SCN works closely with the Jewish Federation of Greater New Haven
Nationwide, the U.S. Jewish community experienced near-historic levels of anti-Semitism in 2018, including a doubling of anti-Semitic assaults and the single deadliest attack in U.S. history at the Tree of Life Synagogue in Pittsburgh, Pennsylvania. The ADL’s annual Audit of Anti-Semitic Incidents recorded a total of 1,879 attacks against Jews and Jewish institutions across the country in 2018, the third-highest year on record since ADL started tracking such data in the 1970s.
A year marked by the white supremacist shooting spree that claimed 11 lives at the Pittsburgh synagogue, 2018 was punctuated by a dramatic surge in white supremacist propaganda activity nationwide. ADL’s Audit identified 59 people from across the country who were victims of anti-Semitic assaults in 2018, up from 21 in 2017, a 180% increase in just one year. While the overall number of incidents represents a five percent decline from the 1,986 incidents reported in 2017, the number still remains at near-historic levels – 48 percent higher than the total for 2016 and 99 percent higher than in 2015.
ANTI-SEMITISM AT AMITY HIGH SCHOOL - A FOLLOWUP
When anti-Semitic incidents in Amity High School became public this last November, ADL stepped in, together with the Jewish Federation of Greater New Haven and BBYO. Amity High School’s commitment to changing their culture spruced meaningful action, marking the beginning of a long-term journey.
Connecticut ADL Deputy Director Marji Lipshez-Shapiro reports that some meaningful curricular, structural, and programmatic developments have already started taking place in Amity. Juniors and seniors lead discussions with 8th and 9th grade English students on intolerance and racism demonstrated through the books To Kill A Mockingbird and Night; teachers participated in ADL’s Echoes and Reflections workshop on Holocaust education; a Holocaust survivor addressed the entire 9th grade class in May in smaller groups of about 80-90 students per session; and high school students trained in ADL’s “Becoming an Ally” program, empowering bystanders to act against hate.
Next year, Amity High School will become one of two pilot schools bringing the ADL’s No Place for Hate® initiative to Connecticut, according to Christina Gray, Associate Director of Education at ADL Connecticut. No Place for Hate® is a school climate improvement framework for preK-12 schools looking to build inclusive and safe communities where all students can thrive.