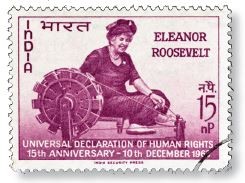 ‘It is Better to Light a Candle than Curse the Darkness’

The days are getting shorter, the temperatures milder, and the colorful leaves are falling from deciduous trees. Autumn is showing us the full richness of its colors. We continue to celebrate Jewish holidays and enjoy the warm weather before the winter. This year, Chanukah and the Human Rights Day start on the same day.

On December 10th, 1948, the United Nations General Assembly adopted the Universal Declaration of Human Rights. The milestone document proclaimed the inalienable rights that everyone is inherently entitled to as a human being, regardless of race, color, religion, sex, language, political or other opinion, national or social origin, property, birth, or other status. Available in more than 500 languages, it is the most translated document in the world. We remember about the tremendous impact done by Eleanor Roosevelt to help millions of people around the world. With her proven dedication to global peace, Eleanor Roosevelt accepted the appointment by President Harry Truman to serve as the only woman among the five American delegates to the newly created United Nations in December of 1945. She was in attendance at the historic first meeting of the institution in London in January 1946.

Eleanor Roosevelt became an unrelenting advocate for millions of oppressed and tyrannized peoples. She advocated the creation of Israel as a Jewish homeland, and reminded the free world of the oppressions suffered by those who lived under repressive communist and socialist rule.

The New American Acculturation Program continues educational programs and holiday celebrations virtually. They celebrated Rosh Hashanah and Sukkot, and had interesting book and movie discussions. The Russian-speaking community is grateful to people like Eleanor Roosevelt who fought for human rights. We are also grateful to those people who helped us escape from the former Soviet Union, and to our community for being supportive in difficult times. We can now light Hanukkah candles openly, without fear of being arrested. It was Eleanor Roosevelt who said, “It is better to light a candle than curse the darkness.”

Let’s light our Chanukah candles and remember all the amazing people who make our life better. Since you get more joy out of giving joy to others, you should put a good deal of thought into the happiness you are able to give. It is another inspiring quote from Eleanor Roosevelt. Technology has allowed us to organize meetings, programs and holiday celebrations with people who would not have been able to attend in person. People from other states and countries joined our programs and celebrations on Zoom. We did not choose to be in this situation, but since we were stuck in it, we have to adjust and find new ways to communicate.

For more information about the New American Acculturation Program, including sponsorships of specific program, contact Yelena Gerovich at (203) 387-2424 x321 or ygerovich@jewishnewhaven.org.