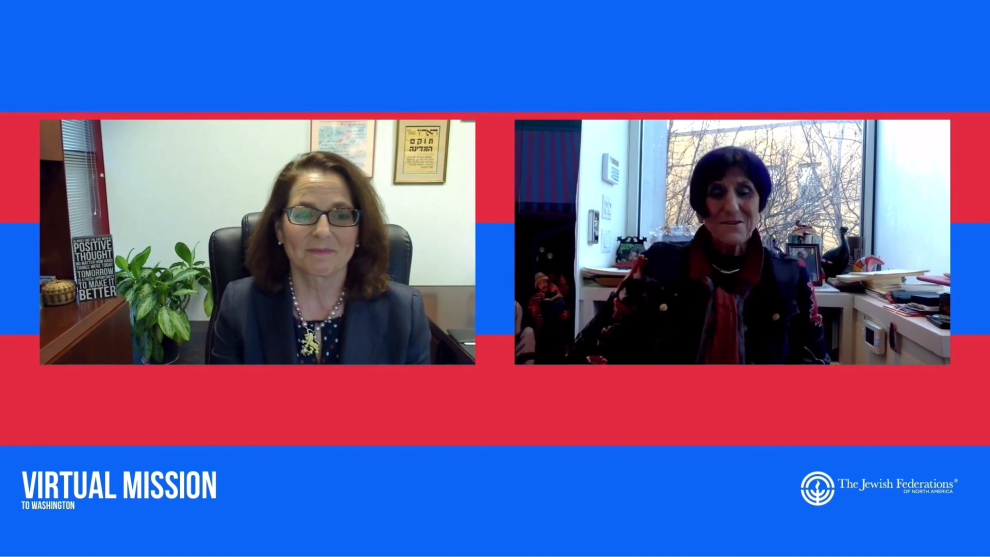 This February, 15 members of the Greater New Haven Jewish community joined delegates from across the United States for the Jewish Federations of North America’s (JFNA) first ever Virtual Mission to Washington, DC.

The goal of the mission was to allow participants to hear from political leaders and policymakers who will fight anti-Semitism, ensure a strong U.S.-Israel relationship, and make the case for government resources to keep communal institutions flourishing and provide for the vulnerable, such as Holocaust survivors. Additional focus was given to anti-Semitism and Holocaust education, as well as the need for increased funding for the Nonprofit Security Grant program, which has benefitted organizations and synagogues within the Greater New Haven community.

Attendees were also among the first in the nation to virtually meet with members of the new administration and bi-partisan Congressional leaders, such as Congressmen Meeks and McCaul, who head up the Foreign Affairs Committee, and Senator Portman and Congressman Thompson, leads on nonprofit security to advocate for the priorities of the Jewish community. “I was so impressed with the large assortment of legislators from both sides of the aisle,” reflected Jewish Federation of Greater New Haven CEO Judy Alperin. “It all felt so accessible, even remotely.”

The highlight for many in the New Haven delegation, though, came during the February 2 session, “What to Expect in the First 100 Days,” which saw New Haven’s own Rosa DeLauro in her new role as House Appropriations Chair introduced by Alperin. "Rosa steals the floor every time!" remarked attendee Nan Birdwhistell. "I went in person years ago, and found it a phenomenal opportunity to hear Congressional representatives speak on a range of issues of importance to our life. This year's Virtual Mission provided even greater opportunities to participate, and I encourage anyone who can participate in future missions do so."

For those who were unable to attend the Virtual Mission, recordings are available on the Jewish Federation of Greater New Haven’s website at jewishnewhaven.org/jcrc.