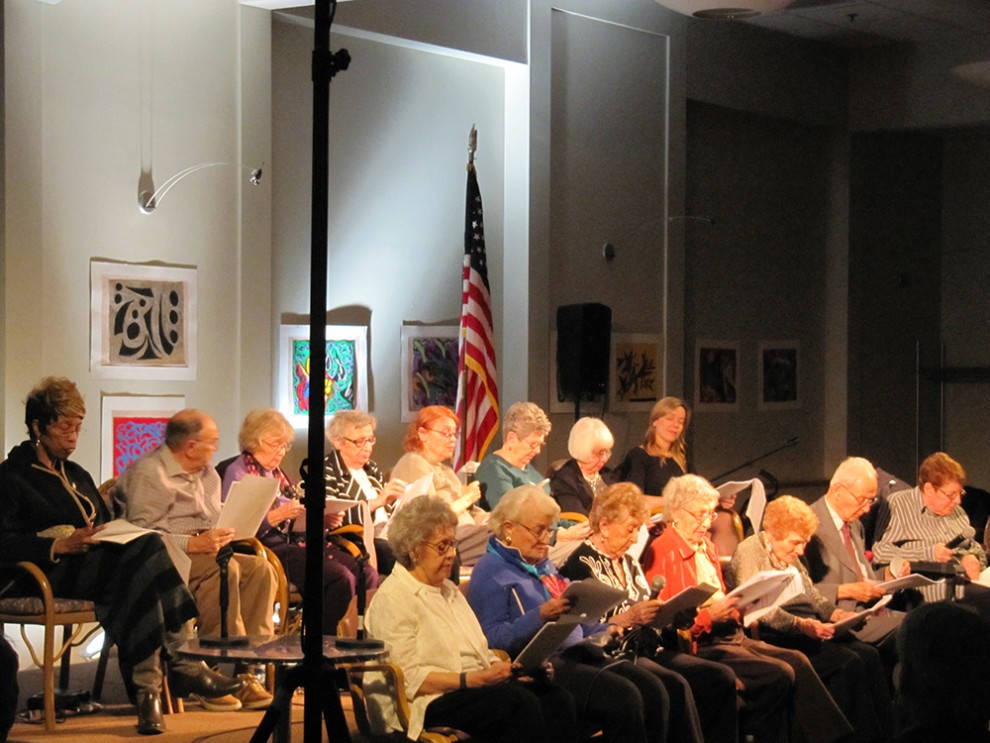 Residents of Tower One/Tower East have been participating in an exciting, year-long project. The Elder Playwright Program is collaboration between Long Wharf Theatre and Tower One/Tower East. This past season, 15 participants from The Towers attended every show in the LWT 52nd Season. The shows they attended were; Meteor Shower, Other People’s Money, Endgame, Napoli, Brooklyn, Smart People, and The Most Beautiful Room in New York. Before and after each performance, the group participated in workshops with Long Wharf Theatre Director of Education, Madelyn Ardito. The goals of these workshops were to explore the plays by engaging in conversations about character development, themes and emotions which residents could relate to their own real life experiences. The residents were then asked to write something about each play and how they either were able (or unable) to draw parallels between their own lives and those they witnessed onstage.
The group spent this year sharing personal experiences--opening up about their lives and losses, while sharing candidly about what matters most to them. Through telling stories and listening to one another they became a community of friends.
Towers resident Lois Itchkawitz, gained a great deal from, “Learning how other people think about things and how it all relates to me,” she shared. As a longtime theater fan, she felt the opportunity to attend LWT regularly with her friends from The Towers was too good to pass up. Towers Resident and Elder Playwright participant, Vicky Smith, “loved the camaraderie that developed among all the other participants in the program.” Smith especially enjoyed getting out on a Sunday afternoon to visit Long Wharf Theatre, hearing the sound effects, and admiring the artistic work that went into the stage sets.
The opportunity to work with Ardito and try their hand at writing was not something any of these participants had ever attempted. At the culmination of the season, the group worked together to edit and streamline their writing into a play of their own, entitled, “The Towers Monologues.”
Although an intensive program, the hard work will pay off, when these residents travel to LWT to star in their own show. This one-time performance of their monologues should not be missed. To sum up, group participant Ellen DuBoff felt that this rewarding program was unlike anything she had ever encountered in her lifetime.
This year’s performance by The Elder Playwright program will be on Sunday, August 13, 2017, and will be held at Long Wharf Theatre. Please mark your calendars and save the date. The performance is free and open to the community. Please join us and listen to the many unique stories our residents have to tell!