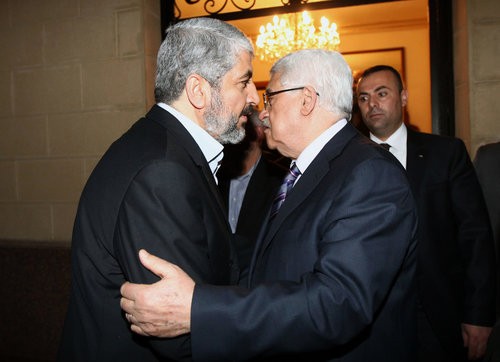 The Gaza-controlling Hamas terror group’s recent decision to sign a unity deal with the Palestinian Authority’s (PA) ruling Fatah party may have been motivated by more than just a desire to reconcile after years of bitter rivalry.

A cunning plan to pave the way for senior Hamas leader Khaled Mashaal to win the PA presidency could be the true aim of the terrorist organization’s willingness to compromise.

This new information was confirmed by senior Palestinian officials as well as Egyptian intelligence officials involved in mediation between the rival factions. These sources told Israel Hayom that one of Hamas’s principal aims in the agreement was to replace aging PA President Mahmoud Abbas, 82, with Mashaal, 61, the former head of Hamas’s “political bureau.”

Mashaal was Hamas’s political chief for almost two decades and is still considered the strongest member of the terror group. Senior Palestinian officials told Israel Hayom that despite recently resigning as Hamas’s political leader and being replaced by Ismail Haniyeh, Mashaal has made no effort to disguise his ambition to clinch the coveted PA presidency.

In private conversations, Mashaal reportedly told his companions he would back significant reforms to the Hamas charter to allow the organization to join Palestine Liberation Organization (PLO) institutions—a move that would allow a Hamas candidate to compete in PA presidential elections.

According to the Palestinian and Egyptian officials, one of the main articles in the Palestinian reconciliation agreement deals with the option for significant reforms to both the PLO and Hamas—namely, measures allowing Hamas to join the PLO. This move would pave the way for Mashaal to declare his candidacy.