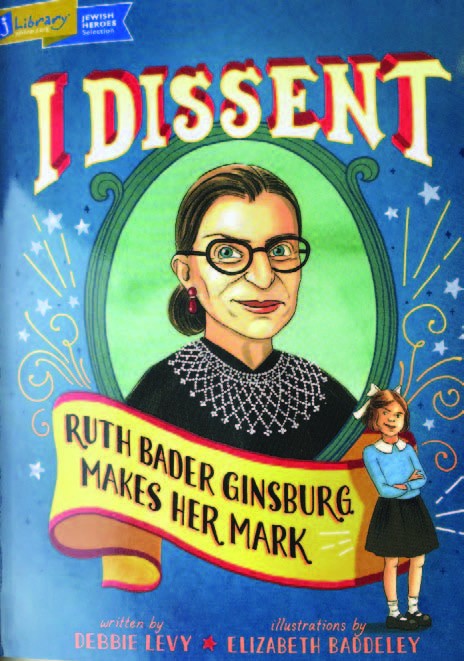 “I Dissent - Ruth Bader Ginsburg Makes her Mark” is a new PJ Library book written by Debbie Levy with illustrations by Elizabeth Baddeley, and is part of a PJ Library series about Jewish heroes. The powerful and inspiring story of the life of Supreme Court Justice RBG, as she is affectionately named, is written for elementary school aged children as they develop the ability to solve problems with their own creativity, processing and thinking. Ruth is an outspoken girl who is encouraged by her mother to speak her voice during (even more) difficult times for women to do so. Ruth’s mom, Celia Amster Bader, took her to the library, and from a young age Ruth began reading the signs all around her both literally and philosophically. She dedicated her life to following her passion for learning, doing woodwork (shop) when it was not for girls, singing out loud, writing for the newspaper and fighting for equal treatment for women. She went to law school, became a professor and argued cases in front of the Supreme Court even before she became a Supreme Court Justice. PJ Library says “Encourage your child to think like Ruth Bader Ginsburg and imagine resolutions for some of the challenges she faced throughout her life.”

As children begin to strategize, they develop their own voices, which prepare them to define themselves in a world filled with challenge and choice. Ruth Bader Ginsburg provides an outstanding role model of respectfully, but forcefully, dissenting as she became a major figure who helped to shape pieces of the ethical code we live by and aspire to achieve.