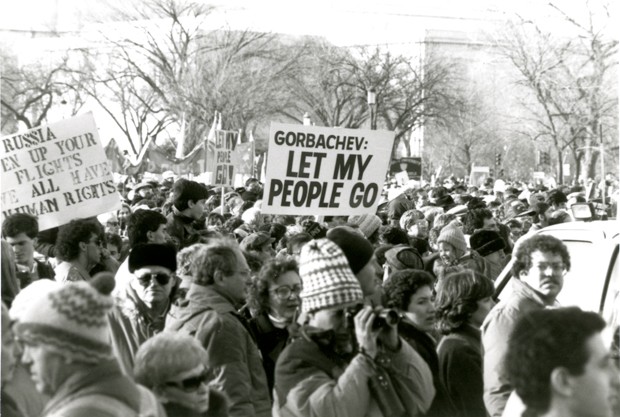 Thirty years ago, on Dec. 6, 1987, 250,000 people marched on Washington to free the Soviet Jewry. The rally, organized by the National Coalition Supporting Soviet Jewry (NCSJ), saw Jews come from all across the country on the eve of Soviet Premier Gorbachev’s first U.S. visit to demand: “Let my people go!” It was this unprecedented display of unity by the Jewish community worldwide that led to the gates being opened and Soviet Jews being allowed to emigrate and be free of religious persecution.

As Thomas Jefferson wrote: “The boisterous sea of liberty is never without a wave,” and now the beneficiaries of this great march are all around us. Like the Jews in the days of the Maccabees, the Jews in the Former Soviet Union were also prohibited from studying Torah. Everything is different for them here in America, where they are free to observe and celebrate all Jewish holidays.

As part of the New American Acculturation Program, Jews from the Former Soviet Union celebrated Hanukkah in December. They were able to celebrate openly, with Hanukkah candles and dreidels, items that were not available anywhere for sale for almost the whole 20th century in the Former Soviet Union. What a difference those 250,000 made 30 years ago. What a difference we can make all together today.

Other programs offered to this group included educational workshops, Thanksgiving celebrations and a lecture in Russian as part of the Taste of Honey program in November. The Jewish Federation of Greater New Haven provides free transportation for low-income families.

For more information about the New American Acculturation Program, including sponsorships of specific programs, contact Yelena Gerovich at (203) 387-2424, x321, or email ygerovich@jewishnewhaven.org