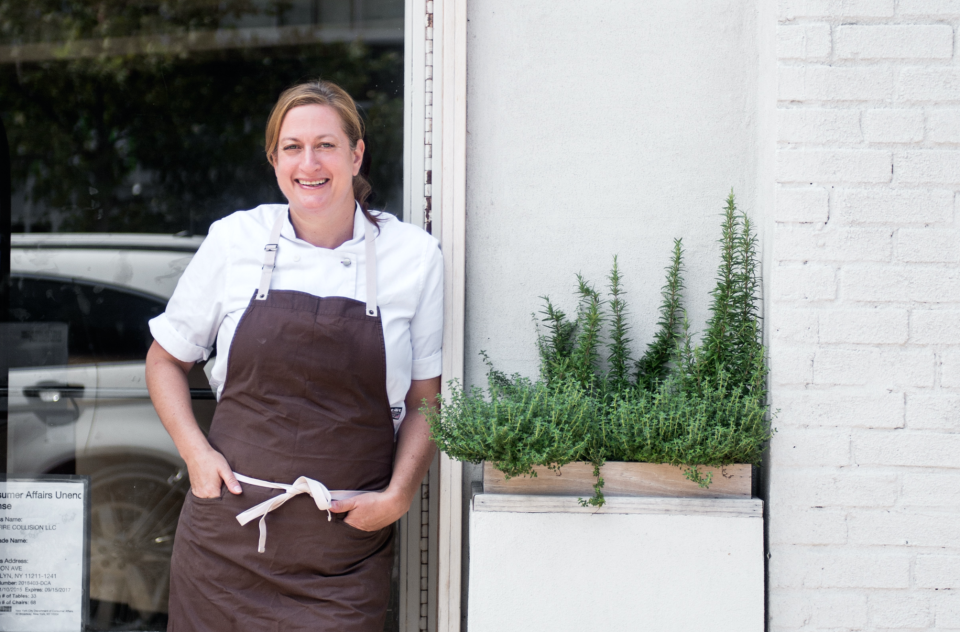 You’ll have to forgive Carol and David Robbins, of Guilford, for kvelling a bit about their daughter lately. Missy Robbins, 47, who grew up in North Haven, recently received the coveted James Beard Foundation Award for Best Chef in NYC for her Italian restaurant, Lilia, in Brooklyn. The award is considered the food industry’s highest honor, in fact, Time magazine calls it “the Oscars of the food world.”

“It’s all very exciting, “Carol Robbins admitted. “We’re all just so proud of her. No one else is more excited than our son (Matt) and our family in Chicago. She’s being recognized for all of her hard work.”

The Robbins family has every reason to be proud of Missy, who is already hard at work planning to open a second restaurant in August, called Misi, also in Brooklyn. Carol said her daughter’s new restaurant is a “pasta/vegetable-orientated” restaurant that will be open for both lunch and dinner. Lilia, one of New York’s hottest restaurants, is only open for dinner.

Robbins was named “Best New Chef” by Food & Wine magazine in 2010, but in her book, she is quick to credit her parents, who she said were “foodies before it was cool.” In fact, Missy dedicates her cookbook to her parents, “for instilling the greatest love of hospitality and food.”

Missy was born in Washington, D.C. The family moved to North Haven, Connecticut, when she was just a year old. Missy grew up in a traditional Jewish home where the family observed Shabbat every Friday and enjoyed a special dinner together, Carol Robbins said.  “She loves my brisket,” Carol Robbins remarked. “Whenever she comes home, she asks me to make it for her.”

In her book, Missy calls her mother, Carol, “the Jewish Martha Stewart,” adding that, “In addition to the few delicious dishes she cooked, her expertise in décor, proper entertaining, and hosting were branded in my brain from a very young age.”

Not only did she love dining at home with family, Missy loved going to restaurants, “from the local pizza joint to the most elegant places in Paris.” David Robbins said Missy started eating pizza almost immediately from the first day they arrived in North Haven. The family often ate at Bimonte’s in Hamden. The Robbins family lived in North Haven until Missy was 15 or 16 years old, according to her dad. From 7th- 12th grade, she went to Hopkins School, David Robbins said.

Missy also played soccer. What she learned on the soccer field has translated to how she treats her team at the restaurant, according to her mom. “She supports them. She depends on them. She believes in her team and gives them credit for their work.”

Missy had her bat mitzvah at Congregation Or Shalom in Orange. “We schlepped from North Haven to Orange several times a week,” Carol recalled.

When Missy was a junior in high school, the family moved to Cheshire. Then the family attended Temple Beth Sholom in Hamden. The family even visited Israel when Missy was just six years old. She attended Camp Ramah in Massachusetts for several years and also went to Israel on a trip with Camp Ramah.

While Missy isn’t very observant, Carol said her daughter does care about family and spending the holidays with them. The recipe called “Cacio e Pepe Kugel” in her cookbook, pays tribute to her Jewish roots, her mom said.

At 12, Missy dined at a three-star Michelin restaurant and she can still remember every detail from that experience, but she never set out to be a cook at first. Missy was an art major at Georgetown University, but an epic dinner with her family at Charlie Trotters in Chicago changed her career path forever. She said in her book that she was entranced by every detail of that meal. “That night, I decided I wanted to cook and own a restaurant just like Trotter’s,” Missy said in her book. “However, aside from cooking at home, I had never properly held a knife!”

In her last semester of college, Missy got a job at restaurant 1789, where she learned the “foundational cooking techniques” she needed. Missy graduated Georgetown University in 1993. After a year at 1789, Missy left Chicago to attend Peter Kump’s New York School of Cooking in New York. From there, she worked her way up, training with top chefs, including Anne Rosenzweig and Wayne Nish. She also took a trip to Italy, where she apprenticed at several restaurants. Missy served as executive chef for several very well known, highly lauded,  American restaurants, including Chicago’s Spiagga and New York's A Voce. At Spiagga, she worked with acclaimed Chef Tony Mantuano. She credits Mantuano as her mentor. She also cooked several meals for the Obamas at Spiagga. A Voce’s two locations, where Robbins worked as executive chef, earned two Michelin stars during her time there.

In May of 2013, without any plan, Robbins made a brave choice to leave A Voce to “clear her head” and figure out what would make her happy. During her sabbatical, she reconnected with friends, travelled to Italy and to Asia and learned to navigate her own small apartment kitchen and cook simply. She also used the time to focus on her health and her diet. She even joined Weight Watchers and lost 40 pounds.

In January of 2016, Robbins launched Lilia, which offers a fresh take on classic Italian cuisine, in a quiet corner of Williamsburg. In 2016, Lilia was named one of the New York Times’ Top 10 NY Restaurants of 2016 and won the Readers Choice for Restaurant of the Year at the 2016 Eater Awards.

Carol Robbins said when Missy decided to take some time off, she didn’t expect as much support from her family and friends as she got. “We always supported her following her passion,” Carol said. “She’s 47 and she still has her passion. She loves what she’s doing and she’s having a lot of fun.”

“She did all of this the right way, “said her father, David, of her success. “She worked very hard from the bottom to get to the top.”

“We’re really proud of her because of who she is and how she has managed her life,” Carol Robbins said. “This award is just the whipped cream on top. I expect they’ll be more to come. She’s on a roll.