Our Israel office reports that at 5:20 am (Israel time) today, thousands of residents of Israel’s center were awoken as sirens sounded warning of an incoming rocket strike. A powerful J-80 rocket – which has a range of 75 miles – hit a home in a moshav near Kfar Saba called Mishmeret. The house was engulfed in flames and has been completely destroyed. Seven people were injured in the attack, and the family’s two dogs were killed. One 59-year-old woman was moderately injured, with light burns, shrapnel wounds and trauma from the blast. A 30-year-old woman was also moderately wounded, with shrapnel hitting her leg. The other people in the building — a 30-year-old man, 12-year-old girl, 3-year-old boy and 18-month-old baby — sustained light wounds. This attack on Mishmeret was the farthest-reaching rocket attack from Gaza since the 2014 Hamas-Israel war. Footage of the destroyed house, filmed by the Israel Police, can be seen here. 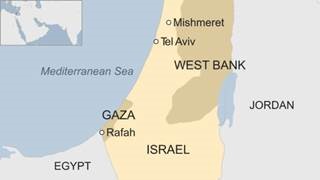 Prime Minister Benjamin Netanyahu, who is currently in Washington for the AIPAC conference, announced that he will return to Israel early, immediately following his meeting with President Trump in a few hours’ time. He added that Israel’s response to the attack would be “harsh.” In the meantime, two infantry brigades (comprising over 1,000 soldiers) have been called up and are currently making their way to the Gaza border. The two border crossings into Gaza have both been closed.

Israel has a limited number of Iron Dome rocket-defense systems and crews, and while the IDF has not confirmed this, it is assumed that the system was not deployed in the Kfar Saba area today.

Less than two weeks ago, rockets were launched from Gaza towards Tel Aviv. At the time, Hamas said that those rockets were launched in error; a claim that was seemingly accepted by Israel. Hamas has repeated this claim today, but it is less likely that Israel’s defense officials will accept this excuse a second time. In a tweet a short time ago, the IDF said it holds Hamas responsible. Following the attack, Palestinian terror groups began evacuating their positions throughout the Gaza Strip ahead of expected Israeli counter-strikes.

Recent weeks have seen increased violence from Gaza, including numerous incendiary balloons, a bomb thrown at Israeli troops guarding the border, riots at the fence and more. In retaliation, Israeli jets have struck numerous targets inside Gaza.

In addition, Hamas authorities have been facing significant rioting by Gazan residents unhappy with price hikes, and some Israeli commentators suspect that Hamas may be trying to divert attention away from this rioting by striking Israel. Similarly, the Hamas leadership may believe that Netanyahu would be wary of any significant military activity (the results of which are always unpredictable) immediately before elections.

While security forces and the country as a whole remain on high alert, schools have reopened, and there have been no special instructions issued for citizens.

As always, JFNA’s Israel office is in close contact with our partners, and is monitoring the situation closely.