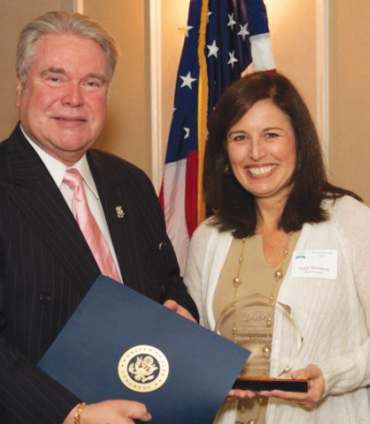 After serving 14 years in the State Senate, Gayle Slossberg (D-14), the only Jewish state senator for the last several years, has announced that she will not seek reelection in November. Her district encompasses Milford, Orange, West Haven and Woodbridge.

Slossberg said she has always listened to her constituents, done her homework and voted for what she believed was in the best interests of the community and the state.

"During her tenure as a state senator, she has championed legislation that sent millions of dollars to Jewish day schools and the New Haven Jewish Community Center in order to increase their security,” Bloom noted. “In addition, Gayle has been a strong advocate for including Holocaust education in Connecticut schools.”

Bloom said that Slossberg was also a leader in getting last year’s hate crimes bill passed, which he said makes Connecticut the state with the “toughest hate crimes laws on the books.” He said Slossberg championed a bill passed in 2006 which concerned the divestment of state funds invested in companies doing business in Sudan, in response to the atrocities which occurred in that country.

“She’s always on the front line, speaking up against injustice and hate,” Alperin said of Slossberg, who is also a Jewish Foundation of Greater New Haven Woman of Vision. “Sen. Slossberg has been an active proponent advancing causes important to the Jewish community as well as supporting opportunities to build business relationships with Israeli companies,” Alperin added.

"She will be dearly missed by me and the Jewish community,” Bloom said. “She has been a legislative leader for over a decade.

Sen. Slossberg led Connecticut’s first Select Committee on Veteran’s Affairs where she championed the most comprehensive package of benefits for veterans since WWII and developed the Connecticut Wartime Service Medal.

Slossberg also chaired the Government, Administration and Election Committee for six years where she passed significant government reforms. As the vice chair of Public Health for a decade, she overhauled the state’s lead poisoning laws and ensured that lifesaving AEDs are in every school and that breast self examination is taught in schools.

As chair of the Human Services Committee, Slossberg argued for a fair system for nonprofit providers and led the charge to improve the auditing process. She developed the state’s mental health clearinghouse. She created the state’s first job creation tax credit program. Slossberg was also chosen to lead the Commission on Enhancing Agency Outcomes.

As co-chair of the Education Committee, Slossberg was the moving force to make Connecticut the first state to provide a state-sponsored SAT for every high school student. She also championed the reform of the state’s high school graduation requirements, dyslexia legislation and access to full-day kindergarten.

Most recently, she was named the Legislator of the Year by the Conference of Connecticut Municipalities for her advocacy on behalf of her constituents and all 169 municipalities

From reviewing bills with seniors, to attending PPTs with parents of students with disabilities, to fighting red tape at the VA for veterans, these are the moments Slossberg said she will cherish, “but it is time for me to seek new ways to serve the public and I am ready for that challenge.”